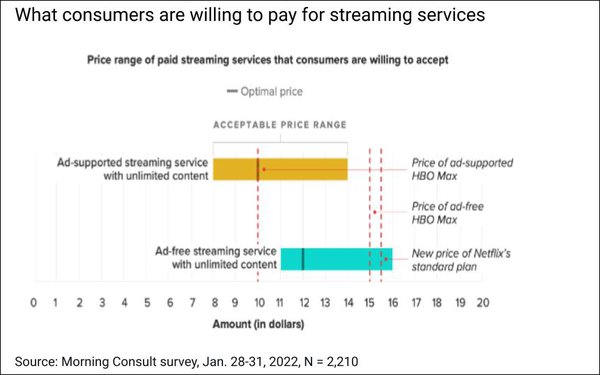 U.S. consumers’ “ideal” price for a subscription-based video-on-demand service offering unlimited, ad-free movies and shows is $12 — unchanged since 2019, according to the latest data from Morning Consult, from a representative survey of U.S. adults conducted in January.

Having just raised its monthly fee from $14 to $15.50, that puts Netflix’s price well above the ideal. Further, the new price is just 50 cents shy of the $16 that Americans now say is the highest acceptable price for an SVOD.

Still, the data present “a cautionary tale for companies as they try to generate more revenue from their subscribers amid an increasingly competitive landscape,” noted report author Sarah Shevenock.

As Netflix’s subscriber growth slows in its largest market, North America, it needs to bring in more revenue through higher prices, while trying to maintain subscribers (and/or raise more revenue) through offerings like games, live events and merchandise shops.

“Netflix and HBO Max are quickly approaching the top of consumers’ preferred price range, while others such as Disney+ and Apple TV+ still have room to go higher,” Shevenock writes.

“Given that consumers haven’t fundamentally changed their minds in the last three years about how much a service should cost, additional increases could spur consumers to reconsider the number of subscriptions they can afford. It is a delicate game of which companies such as Netflix are well aware, but for now, they think the added revenue is worth the risk of losing some subscribers.”