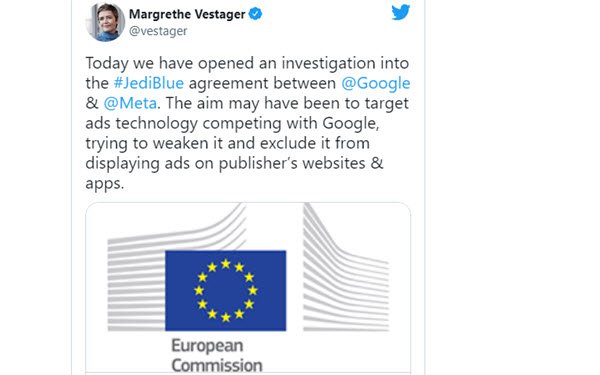 EU’s competition division and the U.K.’s Competition and Markets Authority (CMA) announced on Friday that they are probing allegations that an internal agreement, dubbed “Jedi Blue,” gives Facebook preferential rates and priority choice of premium ad placements in return for Facebook’s supporting Google’s system instead of header bidding, or building its own system.

These follow on a multi-state lawsuit against Google based on that same agreement, originally launched by 10 U.S. states attorneys general in December 2020. That suit, which has since expanded to include 15 states, is ongoing.

In March 2017, Facebook announced that it would support header bidding, the system devised by other companies to challenge Google’s dominance in the ad auction and search arenas — only to reverse its decision a year later.

“Many publishers rely on online display advertising to fund online content for consumers,” stated Margrethe Vestager, executive vice president in charge of the European Commission’s competition policy. “Via the so-called “Jedi Blue” agreement between Google and Meta, a competing technology to Google's Open Bidding may have been targeted with the aim to weaken it and exclude it from the market for displaying ads on publisher websites and apps. If confirmed by our investigation, this would restrict and distort competition in the already concentrated ad tech market, to the detriment of rival ad serving technologies, publishers and ultimately consumers.”

The U.K.’s CMA said it will examine whether the Googe-Meta agreement broke the law and also probe “Google’s conduct in relations to header bidding services more widely to see if the firm abused a dominant position and gained an unfair advantage over competitors trying to provide a similar service.”

“If one company has a stranglehold over a certain area, it can make it hard for startups and smaller businesses to break into the market — and may ultimately reduce customer choice,” stated CMA’s CEO, Andrea Coscelli.

Google released a statement saying that the allegations are not only false, but that the agreement with Facebook was a “publicly documented, procompetitive agreement” that allowed Facebook and many other companies to participate in its Open Bidding program.

Meta echoed that, calling the deal an “non-exclusive bidding agreement with Google,” adding that “similar agreements we have with other bidding platforms have helped to increase competition in ad placements.”