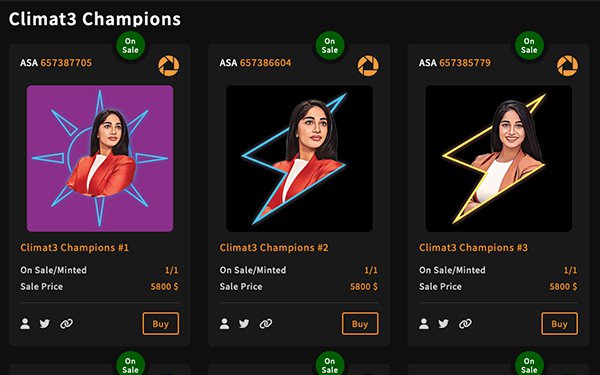 Kurani partnered with Abris, a carbon-negative NFT marketplace built on the Algorand blockchain -- aiming to raise awareness for her campaign while highlighting the potential for innovative, climate-friendly solutions to the Web3 space.

According to a recent statement, the 230 NFTs are intended to represent the 230 billion tons of carbon remaining in the world’s carbon budget.

“We have about 6-11 years left in our carbon clock and we need to elect representatives who understand climate change and will take immediate action,” reads a statement on Kurani’s NFT marketplace page. “By joining our journey, you can help build a Congress that understands technology and the need to fight climate change.”

This is not Kurani’s first NFT drop. In December 2021, she became the first candidate running for federal office to launch an NFT, publishing 2,022 NFTs on the Solana blockchain as a means to attract the cryptocurrency industry to her campaign to claim a seat in the U.S. House of Representatives.

The Federal Election Commission approved political cryptocurrency donations 8 years ago, but until recently, few campaigns have taken advantage of this decision.

In the past year, some political candidates have followed Kurani’s lead. According to Politico, NFTs are becoming a big business in politics, allowing candidates to cash in on crypto while engaging voters.

Masters also released NFTs to campaign supporters, which invited them to a party co-hosted by Thiel and provided a private channel on Discord on which they could message Masters.

Kurani's new collection of NFTs, which are available for purchase between now and March 31, also provide buyers with exclusive utilities surrounding her platform.

Priced at $1,250 and $5,800, the NFTs will grant access to airdrops from other crypto and climate projects, as well as intimate conversations with climate scientists and exclusive invitations to the campaign’s Earth Day party in the metaverse.

“By partnering with Abris for this drop, which leverages the hyper-efficient Algorand network, we're shining a light on the innovation happening in the Web3 world ––innovation that is community-driven, inclusive, and, yes, climate-minded,” says Kurani.

Abris, launched in 2021, markets itself as an creator-minded, artist-friendly NFT marketplace. All artists and collectibles are fully verified, and artists who sell on the platform receive 90% of primary asset sales, along with 5% of secondary sales.

“It is very promising to see political candidates getting creative and venturing into the world of NFTs,” says Priya Samant, CEO of Abris.