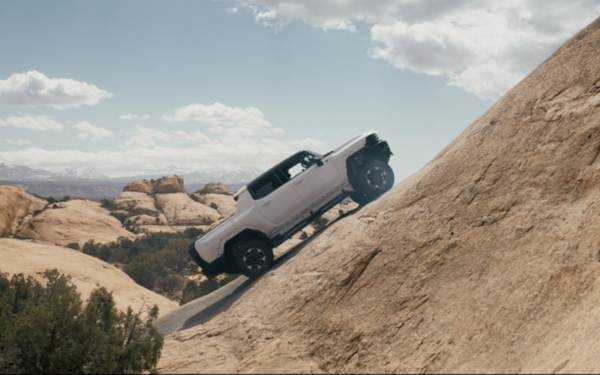 GMC is partnering with A+E Networks for a documentary detailing the development of the Hummer EV.

“Revolution: GMC Hummer EV” will debut on the History Channel on March 27. The film will also be shown on FYI Channel on  March 31 and will also be available for streaming via History on Hulu and History.com on March 27, as well as on GMC’s YouTube channel starting April 3. A one-minute and 45-seconds teaser was released today on YouTube.

Filmmakers were given full access, which resulted in the team documenting key moments in the vehicle’s record-fast development, from inception to start of production, according to General Motors.

The Detroit-based automaker’s goal was to push the boundaries of an electric vehicle’s capability, says Josh Tavel, executive chief engineer.

“Their learnings are laying the foundation of vehicle development for decades to come,” Tavel says in a release.

GMC selected Detroit-based WTP Pictures and Hiatus to produce the film, and director Sean King O’Grady to bring the team’s journey to life.

The film includes the team testing the limits of the vehicle on snow and ice in the freezing temperatures of Michigan’s Upper Peninsula and then heading to the scorching heat and steep red rocks of Moab, Utah, to fine-tune the truck’s off-road capability.

Along the way, viewers will get a look at GM’s testing and development facilities -- previously unseen by the public -- including the GM Design building at the Global Technical Center in Warren, Michigan., and the company’s proving grounds in Milford, Michigan, and Yuma, Arizona.

“The story we discovered while filming was far more fascinating than anything we could have hoped for,” O’Grady says in a release.

The first customer deliveries began in December of last year and will continue throughout this year. GMC’s electric lineup will expand with the 2024 GMC Hummer EV SUV, which will go into production in early 2023, and the all-electric Sierra Denali.

Reservations for available models are currently accepted at GMC.com/HummerEV.