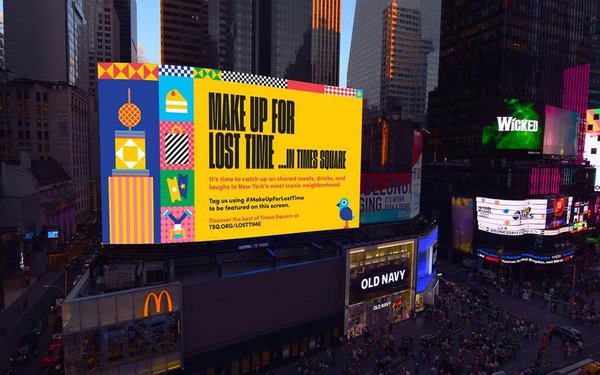 Known as "the crossroads of the world," Times Square is in full recovery mode.

Times Square Alliance and OutfrontMedia launched the “Make Up for Lost Time in Times Square” campaign to welcome tourists and commuters alike to the iconic district, covering West 42 to West 47 Streets.

The timing coincides with the lifting of mask restrictions that were in place for many entertainment centers and restaurants in New York City for the past two years. (Broadway continues to require masks/vax cards.)

The campaign showcases the best of Times Square, including theaters, shops and attractions.

Artist Zipeng Zhu created the colorful graphics and Outfront Studios designed the five screens projected in Times Square and on a banned atop the Red Steps/TKTS booth.

They encourage viewers to browse curated guides, hosted on the Times Square Alliance site. For instance, there are a host of new restaurants, including Jasmine’s Caribbean Cuisine, with cuisine hailing from Dominica, Antigua, St. Thomas, Trinidad and Jamaica. Prime Catch (steak and seafood), and Bacall’s Steakhouse, a family-style Jewish Romanian steakhouse.

The Alliance also provides programming in public spaces to promote local businesses via Taste of Times Square Week, free outdoor concerts and public art. Such events will run through the summer.

Also, during March and April, 15 Broadway shows will open.

Tom Harris, president of the Times Square Alliance, said: “This campaign celebrates the resilience of our businesses that have made it through, applauds those who boldly opened during the pandemic, and rejoices as new Broadway shows start performances each week.”

The recovery of Times Square is key to the economic health of the city. Times Square, representing 0.1% of New York’s total area, represents 15% of its economic output.