Why Did The Media Buyer Cross The Road? 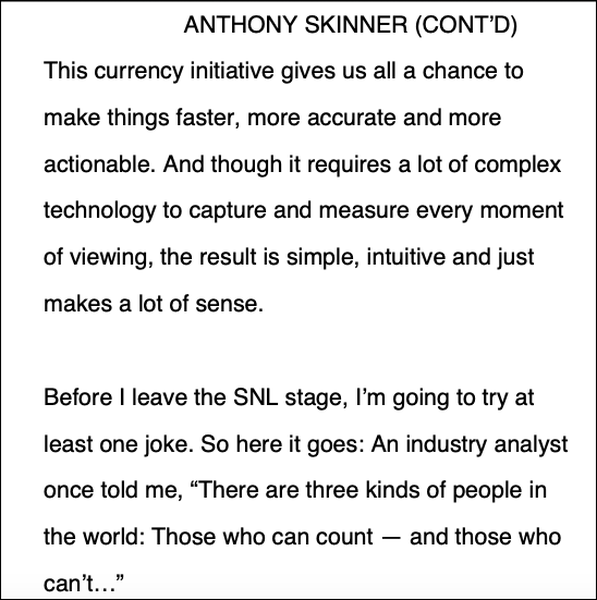 After more than 40 years covering the advertising marketplace, let me be the first to acknowledge it often is a dull and complicated endeavor where levity, bright lights, pizzazz and little sizzle can be welcome breaks from -- to quote ANA chief Bob Liodice -- the "mind-numbing complexity" of the business.

And the hype -- er, I mean height -- of that has always been the annual network upfront ad presentations when the Big 4 bring out their big guns to dazzle advertisers and media buyers with Hollywood production values, talent and good old fashioned showbiz. And of course, the shrimp cocktails.

What some people may not understand is the soft-sell begins long before anyone takes the stage at Carnegie, Alice Tully or even Radio City Music halls, and it is a carefully planned, and sublimely executed process that begins at the start of a new year when the networks begin schmoozing with advertisers and media buyers over expensive power lunches, and entertain them and provide them "hospitality" at the world's most coveted televised events, beginning with the Super Bowl, and every-other-year-or-so, and Olympics, all leading up to the Big Show.

One of my best sources -- a former Madison Avenue media Macher who went to the other side and became one of the most influential network spinmeisters -- once outlined the process explicitly for me, almost like it was scripted.

Actually, in the case of NBCUniversal, I now know it really is scripted. If you don't believe me, click here and you can read the verbatim shooting script NBCU used to produce the "developers conference" it hosted big advertisers and agencies at in its famed Studio 8H -- the setting for "Saturday Night Live" -- inside its Rockefeller Center HQ.

(Note to NBCU's Advertising & Partnerships Communications Team: MediaPost always honors embargoes and confidential information we agree to before the fact, but not to things we receive unsolicited after the fact.)

So now that I've no doubt burned my last bridge to the other side of that road, let me point out that most of the inside jokes you heard if you were in the room or streaming NBCU's developers conference Tuesday actually were scripted -- from the ones delivered by actress and comedian Ana Gasteyer, a former "SNL" cast member and star of NBC prime-time sitcom "American Auto" -- to iSpot.tv Chief Technology Officer Anthony Skinner's "dad joke."

And as good as Gasteyer's -- or Skinner's -- delivery was, it was all part of a well-honed and professionally-executed sales pitch wrapped in the guise of a very serious meeting about how NBCU is leading the charge to use data and technology to transform the way the ad industry buys and sells, well, people.

I'm not going to digress into my rant about why it's a slippery slope for the demand-side to capitulate to the supply-side and let suppliers like NBCU set the standards, "certify" the supply chain, and set the benchmarks its customers use to calculate the return on what they buy from NBCU, because I've written about that a few times already.

Plus I know we're all a little overwhelmed, looking for simplicity to offset the mind-numbing complexity, even if it means our suppliers are the ones certifying what we get.

That's not new in the network TV world where the big broadcast networks have always called the shots, requiring advertisers to "register" their upfront budgets, and having an undue influence on the way their ad buys were measured, posted, and fulfilled.

And it's certainly not new from the other world of media-buying that NBCU has been trying to emulate in recent years, the digital supply chain comprised of humongous walled gardens that have long "certified" their supply chain, even the supposedly media neutral ad agencies that do business with them.

But the difference is that in digital, advertisers and agencies had no choice, because that's the way that industry evolved.

In the case of the major TV network owners, companies like NBCU are remaking themselves in the model of Google, Facebook, Amazon, etc., because, well, you know why.

But the big difference between NBCU's developers conference and the ones hosted by Big Tech companies, is that Google at least focuses on moonshots, while NBCU is still delivering rimshots.

That's because NBCU has been doing that longer than the 40 years I've been covering it. It goes back to the earliest days of the network upfront process -- another kind of developers conference literally called "development meetings" -- when the networks would fly their biggest clients out to the West Coast and host them on their Hollywood sound stages to hear them and some of their stars give them early first-look pitches on concepts and shows they had in development.

Those meetings were a vestige of a time when advertisers actually were the networks' partners and literally sponsored -- if not actually produced -- whole shows that were associated with the advertiser's brand. Over time those sponsorships fragmented into mere media buys, and advertisers became the demand-side for what the networks were selling. But the networks continued to use their Hollywood insider trappings to maintain the perception that it was more than a buyer/seller relationship. That they were partners, executing gentleman's agreements, and taking care of each other when things didn't work out.

It's always been a club, and you were privileged to be a member of it, even if the cost of joining was your media neutrality, and the ability to look objectively -- and more importantly, to measure objectively -- what you got in return.

So NBCU's development conference is just an evolution of that and instead of wowing ad execs with Hollywood star power, they're using the power of Big Data, troves of high fidelity consumer identity matching, technology, automation, and other Big Tech associations that the digital side of the demand-side has come to expect as its "currency."

Honestly, NBCU has done a pretty good job of walking that line, but the transition is still a little awkward as it mushes two different worlds together, into a new Frankenstein creation that is a little bit of old school network upfront hype combined with a lot of walled garden obfuscation.

They may talk about "transparency," but they're stacking the deck, setting the benchmarks, and becoming the integral source for pulling it all together vis a vis NBCU. They even branded it "NBCUnified."

Of all the insider jokes NBCU's presenters made Tuesday, I think one that ad chief Linda Yaccarino delivered may be most telling.

Her set-up was thanking a presumably off-premises "Neil" whom insiders probably know, and who Yacarrino said couldn't be there, because "his horse and buggy got stuck on the [Long Island Expressway]."

It was an ironic set-up, given that moments later, while speaking about how consumer behavior has been changing with the evolution of media, Yaccarino revealed her own horse-and-buggy-ish mindset, rattling off mobile, social "or that metaverse thing."

Metaverse thing? I'd be very surprised if NBCU isn't unveiling a metarverse thing when it hosts its next developers conference in 2023, but that's just another set-up.

Yaccarino's punch line may be that advertisers and media buyers "shouldn't worry, don't wait, don't be Neil," but the real joke is on anyone who doesn't understand that her job is not to be your friend, make you part of a club, help you step into the future, it's to sell you stuff. 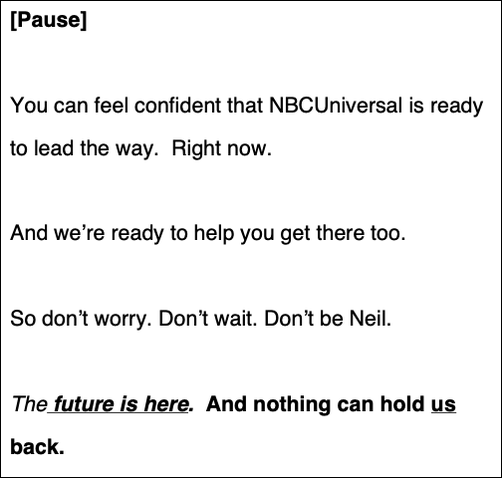 You can read through NBCU's script to find the other jokes, but for now I'd like to leave you with my own punchline, the one that follows the headline on this column: Why did the media buyer cross the road?

To get to the other side, of course.