Oscar Ratings Were Up, And So Were Onstage Assaults 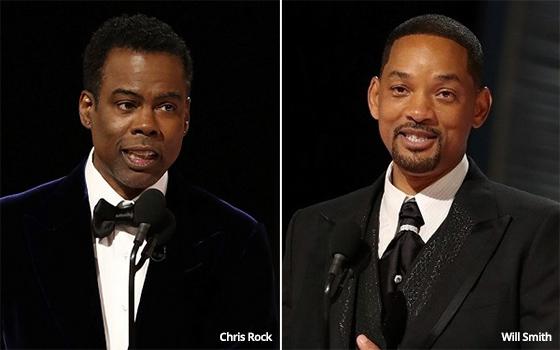 Explanations for the uptick in Oscar viewership Sunday night over a year ago are really just theories.

But here are a few of them anyway. First, interest in and familiarity with this year’s nominated movies was likely more widespread than a year ago.

Why? Because last year’s Oscars honored movies released in 2020, when the COVID-19 pandemic closed movie theaters.

People back then were not even aware of the nominated movies, and certainly not enough to care one way or the other which ones won Oscars.

Second, the pandemic and the lockdown had individuals and families hunkering down at home, where they focused mainly on taking care of themselves and their families.

Perhaps many of them came to care very little about the outside world and its new movies. In short, apathy set in.

This year, with the lockdowns loosening and in many places going by the wayside altogether, people generally seem to be more engaged in the world around them.

Specifically, according to national viewership data released on Monday, an estimated 15.4 million people watched the Oscars. This was reportedly a 56% increase over last year.

That’s a big increase, but many of the news stories that reported on the numbers on Monday noted that it was still the second-lowest audience for the Oscars in history. Last year’s was the lowest.

As for the telecast itself, one of the best things that can be said for it was that it did not lack for star power.

Although anyone can think of top stars who were not evidently in attendance, the auditorium nevertheless seemed to be more full of them than usual.

However, much of the show was an off-putting train wreck long before Will Smith decided to commit assault on international television.

From the very beginning, the show was a tasteless cleavage-fest starting with the tennis-playing Williams sisters who opened the show clad in low-cut dresses that left nothing to the imagination.

I guess it is not big news to conclude that the Oscars are no longer to be considered family entertainment.

And then there is the sanctimonious virtue-signaling on the part of presenters, nominees and winners about myriad causes and social issues that repel viewership year after year after year.

This also started early in the telecast and never stopped, and in the process, no doubt resulted in tune-out throughout the show.

As for the atrocious Will Smith, what can anyone say today that has not already been said in the wake of his attack on Chris Rock after the comedian took a potshot at Smith’s wife?

Smith must have been off his meds to think it would be appropriate to turn the Academy Awards into a street fight.

In uncensored video of the incident that could be found online on Monday, Smith was seen yelling a series of f-word-laden threats at Rock from his seat near the front of the auditorium.

To say that Smith’s actions were classless is the understatement of the year. As a matter of fact, they may have been criminal -- at least the assault part.

So, what is the effect of Smith’s violence on future Oscar shows? The fact is, like auto races that people watch at least in part to be present at a car wreck, so too might Oscar viewers hope secretly for something similar to occur next year.

Perhaps Robert De Niro can react to a comedian’s joke next year with the classic confrontational question he asked so many years ago in “Taxi Driver”: “You talkin’ to me?”

academy awards, awards show, celebrity, movies, ratings, television
3 comments about "Oscar Ratings Were Up, And So Were Onstage Assaults".
Check to receive email when comments are posted.
Read more comments >
Next story loading