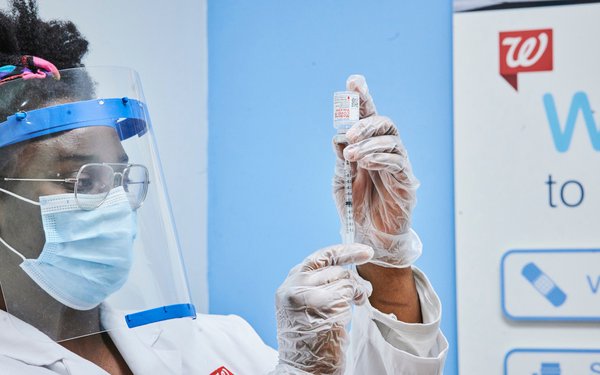 Sales are hale and healthy at Walgreens Boots Alliance. But even though its most recent results were better than expected, investors are rattled by a murkier outlook for the company’s recent investments in healthcare. Analysts are worried that declining cases of COVID-19 may dampen revenues.

Based in Deerfield, Illinois, the company says sales in its second quarter advanced 3% to $33.8 billion. Operating income jumped to $1.2 billion, compared with operating income of $832 million in the year-ago period.

With increasing consumer demand for COVID testing and vaccinations, comparable sales in the U.S. rose 14.7% -- the biggest quarterly increase in 20 years. Its domestic omnichannel initiatives are also gaining ground, with digital sales increasing 38% and membership in its MyWalgreens program climbing more than 10 million, to 96.1 million members.

Comparable sales in the U.K. jumped 22%.

COVID-19 jabs have been a big part of Walgreens’ recent business. So far, the company has administered 62.8 million vaccines, including 11.8 million in the second quarter, and says it’s the leading pharmacy for pediatric vaccinations.

The company is in the midst of multiple transformations, including a greater focus on U.S. healthcare, and is exploring sales of the Boots International drugstore chain.

“We continue to make important strides along our strategic priorities, building a consumer-centric, technology-enabled healthcare enterprise at the center of local communities,” Rosalind Brewer, chief executive officer, says in its announcement.

She also called out significant progress in its health investments. VillageMD, its primary-care platform, continues to expand. It now has 102 co-located clinics open and expects to reach 200 by the end of this year. New markets include Boston; Jacksonville, Florida; Tucson, Arizona; Denver, Colorado; and San Antonio, Texas.

And Shields, a specialty pharmacy it invested in last year, is gaining new contracts.

“VillageMD and Shields are delivering tremendous pro forma sales growth compared to their year-ago standalone results, and our Walgreens Health segment is on track toward long-term targets,” Brewer says.

While that all sounds promising, a leading analyst cut its rating of the company, saying its current business structure “is simply too complicated.”

Baird downgraded the company to neutral. “We remain committed believers that the company is taking appropriate steps for a better future,” writes Eric Coldwell, an analyst who covers the company. But with the sale of Boots still a question mark and the impact of COVID fading, he sees “muddy waters.”

Among the potential problems?Ongoing reimbursement pressures, the competitive landscape, labor issues and wage inflation, a shoplifting explosion, and supply chain concerns. He also cites the question marks over the company’s plan to exit tobacco sales and “nearing and mounting opioids exposure and litigation.”

This week, rival CVS agreed to pay $484 million in an opioid settlement in Florida.

That’s a lot of moving pieces, Coldwell says. “We are torn.” While he sees most of the ongoing efforts will better the company, the Walgreens story just has “too many talking points,” he writes. “And too much is riding on Walgreens Health.”