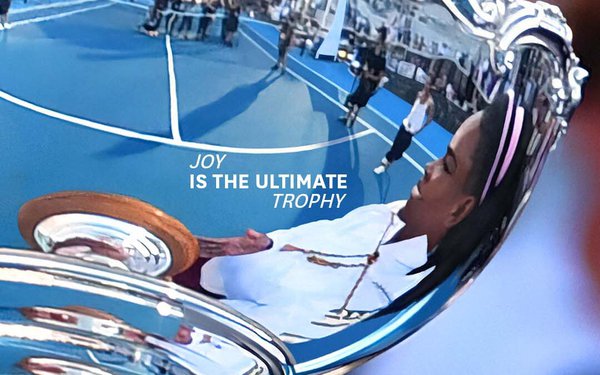 Not surprisingly, considering Michelob Ultra’s recently announced $100 million commitment toward gender equity in sports, half of the featured athletes are female.

These are  Serena Williams, pictured the first time she became a champion following the birth of her daughter in 2017; soccer star Alex Morgan, whose photo was taken minutes after a record-tying performance en route to Team USA’s 2019 World Cup victory; and Nneka Ogwumike, shown celebrating her 2016 WNBA Championship.

Male athletes in the campaign are NFL great Peyton Manning celebrating his 2008 NFL MVP trophy; Anthony Davis, shown during the 2019-2020 season that began with the death of former teammate Kobe Bryant, and ended with an NBA Championship; and golfer Brooks Koepka, whose photo captures the moment he won his first PGA Championship in 2018.

The campaign, from Miami’s Gut Agency, will run through May across digital, social, print and out-of-home.

The print element will include the Los Angeles Times, Golf Digest and newspapers in the athletes’ home markets.

The OOH will include street postings and bus shelters, plus billboards in New York City’s Times Square and Los Angeles’ Xbox Plaza.

A-B’s latest version of Natural Light -- Vodka -- is neither a beer, nor a hard seltzer, nor even a canned RTD. It’s a spirit -- in a bottle.

Introduced regionally in September, the lemonade-flavored brand, aka Natty Light Vodka, is now going national, supported by a contest whose winner will have DJ, producer and recording artist Steve Aoki come to their home for a house party.

Ten semifinalists will need to participate in virtual video interviews to state their case on “why a party at your place will be so legendary you never have to take the party elsewhere.”’

“We knew we needed to go big with the national expansion, and there's nothing more electric than having Steve Aoki perform at your house party,” said Daniel Blake, group vice president marketing, Budweiser & Value at Anheuser-Busch.