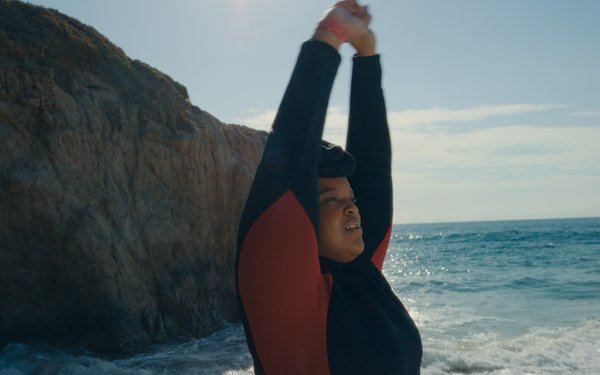 Following up on recent campaigns extolling self-care (“Fit Yourself In”) and non-physical strengths (“What’s Strong With You”), Google-owned wearable health monitor Fitbit returns to TV, digital and paid social today with a four-week flight designed to tie together physical, mental and emotional health (“Feel Your Power”).   Joan Creative will be replacing Argonaut as creative agency.

The brand said it chose Joan due to its “understanding the cultural zeitgeist and reaching new audiences with creative, breakthrough ideas.”

So here’s a first look at Joan Creative’s first work for Fitbit, said to “showcase unexpected stories of people from different backgrounds embodying their power in everyday moments.”

These people just happen to be the new kind of celebrities -- whom you might never have heard of before today.

Three :15 spots feature, separately, TikTok comedian Petey de-stressing thanks to Fitbit’s Sense feature; the world’s first hijab-wearing pro wrestler, Nor Diana, having Fitbit’s Daily Readiness Score tell her to “take charge”; and international educator and creator Leah V responding to the Readiness Score by trying “something new” in the form of surfing.

The ads, targeted to millennials, also feature an upcoming premium feature, Daily Readiness, that Silverio says will “help users understand whether their bodies are ready for a workout or would be better served by a day of recovery instead.” Each morning, Daily Readiness will provide users with a score based on fitness fatigue, heart rate variability and recent sleep.

There are also :15 and :30 overarching spots in which DJ Marc Rebillet, who performs the campaign’s original music, tells viewers to “breathe” and “listen to your body.”

In addition to the spots themselves, some of the celebs in the spots will be posting for the campaign on their own social media channels, Fitbit says.