New Fitbit Campaign Fits Times: It's All About Managing Stress 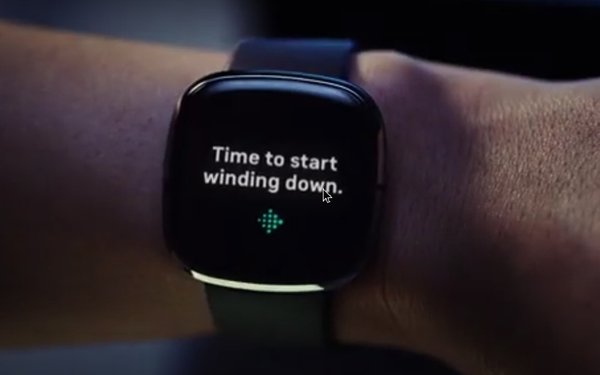 Americans all seem to be in the same place at the same time: Our nerves are jangled from a year of the pandemic and all the future uncertainty that comes with it.

And that gives the new Fitbit “Fit Yourself In” campaign a sharp focus, by driving home its applications as a holistic self-care device that goes beyond physical heartbeats and now monitors more of the body.

“People have stressors that now hit us all day long,” says Hunter Hindman, the founder and chief creative officer of the Argonaut ad agency that created the campaign. “The work-life balance is harder than ever.”

One of the new commercials shows an architect working hard and long on a project until his Fitbit advises, “Take a moment to de-stress.” The other spot shows a young woman, rattled by a day of hassles, whose Fitbit at bedtime tells her, “Time to start winding down.” The next morning, that monitor tells her she had a quality sleep -- a rating of 85 -- and we see that she seems energized.

The latter ad debuted last week during the “Today” show, which may be a perfect placement.

The device also has other modes and suggestions to soften the edges of living in 2021, in its Premium upgrade.

When it launched in 2007, a Fitbit’s information was all about physical health. These days, that’s just the half of it.

Lisa Swift, the director of brand and product marketing, when asked, can walk you through her personal interaction with her Fitbit throughout the day. But she starts her playback of her typical day at the end of it,  with the device’s assistance at bedtime, a time of day she says is “shockingly important.”

During the day, she also checks “the moisture level of my skin” via the Electrodermal Activity sensor that measures sweat level, as it did with the architect in the commercial. The Fitbit may tell her she'd better take some time to chill, too. Other sensors measure the quality of sleep and heart rate data and level of exertion.

That’s a Fitbit that goes way beyond counting your 10,000 steps.

Swift pays attention to what the Fitbit Sense tells her. “My main goal is watching data,” she says, but Fitbit aims to keep that information relevant to consumers. “Health information can be esoteric. Our job is to keep it real.”

Fitbit started the fitness device segment in 2007, and has gone through stresses of its own, like Apple’s entrance into the field. It now leads the market. What happens ahead could be interesting. Google purchased Fitbit for $2.1 billion in a deal that closed in January.

These are otherwise interesting times in the health and wellness field, which has matured in the last year as a sizable number of Americans seem not at all reticent to proclaim that they’ve hit an emotional and physical wall.

“It’s easy to forget to take care of yourself -- and it's "not all bubble baths and spa days,” says Swift.