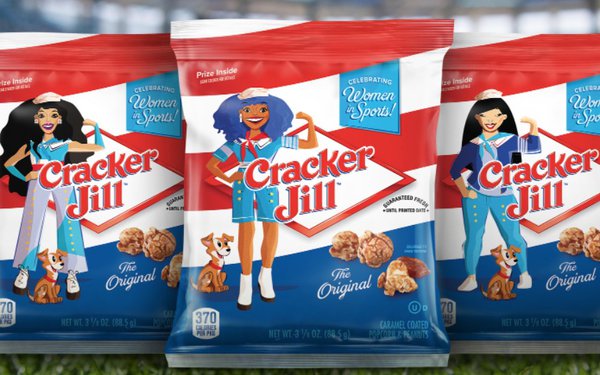 The first female mascot in the 125-year-old caramel-coated peanut and popcorn snack’s history, Cracker Jill is positioned to celebrate women in sports with a revised ballpark jingle voiced by singer Normani.

A 1:30 spot from the Ketchum agency opens with the words “Sometimes all it takes to believe you can do something is to see someone who looks like you do it” superimposed over Normani’s face.

It goes on to recount female achievements in wrestling, football and other sports.

Known for such songs as “Motivation” and “Wild Side,” Normani stands on a baseball diamond while omitting the classic lines in “Take Me Out To The Ball Game”: “Buy me some peanuts and cracker jack, I don't care if I never get back.”

Instead, she sings “Buy me some peanuts and Cracker Jill, no one can stop you if you have the will. So let’s root, root, root for a girl’s dream.”

At the end she declares “We’re adding our face to the game. And we’ll run, throw, never a doubt. It’s a new, ball game.”

“We partnered with Normani to connect with individuals both in and outside of sports in order to drive conversation and awareness around the broader topic of equal representation for women everywhere,” Frito-Lay North America vice president of marketing Tina Mahal tells Marketing Daily.

“We wanted someone who is a fierce supporter of women and a trailblazer in her industry.”

The Frito-Lay has committed $200,000 to the Women’s Sports Foundation, a nonprofit organization founded in 1974 by professional tennis player Billie Jean King to “advance the lives of women and girls through sports and physical activity.”

People who donate $5 to the foundation at crackerjill.com will receive a bag of Cracker Jill, which will be available at the start of this year’s baseball season at professional ballparks across the country.