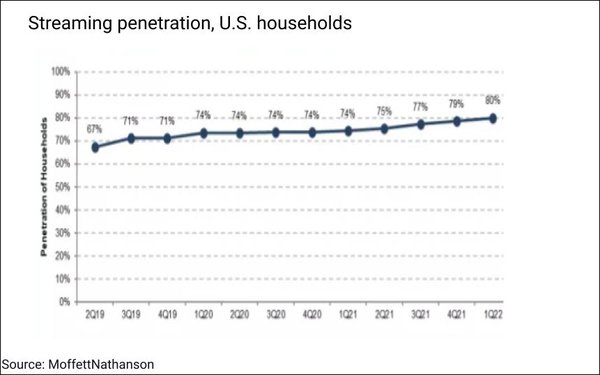 New services including Paramount+ and Peacock, and nonpaid streaming users, pushed streaming’s penetration in U.S. households up to 80% in Q1— up from 74% in Q1 2021, according to a new report from MoffettNathanson analyst Michael Nathanson.

As a group, the largest streaming services, including Netflix, Disney+, Hulu and Amazon Prime Video, saw relatively growth, and penetration in homes with paid streaming subs was flat overall, says the report, which is based on a monthly survey by HarrisX.

Discovery+ ($4.99 with ads, $6.99 without) had little growth but rivaled Netflix and Hulu in daily users. 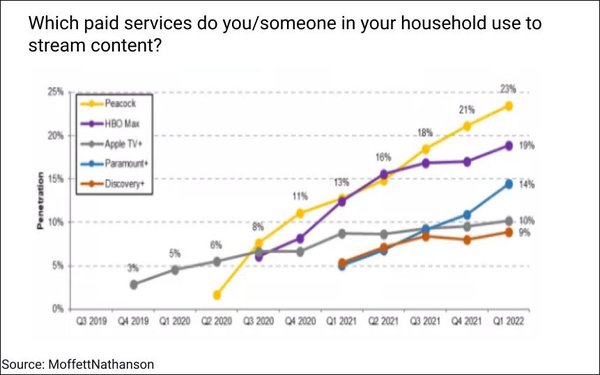 Meanwhile, with Netflix set to report its first quarter results on April 19, most analysts have been projecting that the company will exceed its own estimate of 2.5 million net subscription adds — a projection that caused its stock price to plummet.

While 2.8 million is the predominant analyst projection, Wells Fargo analyst Steven Cahall bumped his estimate up from 2.5 million to 2.9 million, and BMO Capital Markets’ Daniel Salmon lowered his from 2.48 million to 1.76 million.