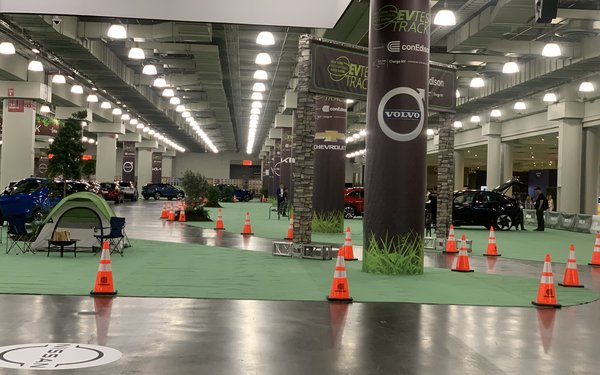 NEW YORK — In a rare moment of cooperation instead of competition, a handful of automakers are sharing the figurative stage at the New York International Auto Show, which opened to the public April 15.

The theme of the show, “The Future is Electric,” tips off the emphasis, but the magnitude doesn’t really hit home until you see the massive indoor test track shared by seven different brands on Level 1.

Visitors can take a ride in vehicles from well-established brands like the Chevrolet Bolt, Kia EV6, Nissan Leaf, Volkswagen ID.4 and Volvo XC 40 Recharge, along with some challengers, namely Indi EV and Vinfast. Alongside the test track are a plethora of educational exhibits which aim to get consumers comfortable with information about charging and other EV related technology.

On the main level of the show, Hyundai and Ford each have their own dedicated EV test tracks where consumers can experience the incredible head-whipping power of an F-150 Lightning pickup truck, Mustang Mach-E or Hyundai Ioniq.

Ford’s exhibit includes “an immersive and exhilarating Mustang Mach-E experience designed to showcase the future-forward electric vehicle’s abilities and learn more about the embedded technology and connectivity built into every vehicle,” per the automaker.

Meanwhile, Hyundai aims to show how it plans to reach its commitment to achieve carbon neutrality in its products and global operations by 2045 by showing off vehicles that are already available.

While I can appreciate an automaker's desire to offer a controlled and dedicated experience, seeing the other vehicles sharing the track drives home the magnitude of change coming in how consumers will drive and maintain vehicles.

Consumers and the media are responding with enthusiasm. Since the show opened to media on April 13, electric vehicles were a popular topic, as demonstrated on Twitter.

Education and exposure is unarguably important to getting consumers comfortable with the idea of owning an EV. There’s so much about EVs that consumers don’t even know what they don’t know.

One example is that unlike filling a gas tank, recharging a battery is a little more complicated. If you are charging during a trip, it’s not beneficial to try to get to a full charge. The fastest public chargers can usually bring an EV up to 80% of its range in as little as an hour, but the last 20% is much slower to prevent damage to the batteries as they get near to full charge.

Basically, there is not a “one size fits all” answer to the question: How long does it take to recharge an electric vehicle battery? This could be off-putting to consumers before they start to learn about the variables involved.

Back to the Twitter data: The fifth most talked about brand on Twitter relating to the New York International Auto Show was Jeep, which continues to offer an outdoor track featuring its internal combustion engine (ICE) vehicles.  The brand is making its 16th appearance at the show. Since 2004, more than 425,000 New York auto show attendees have experienced the off-road driving course. This year's track features a bigger, 10-foot steeper Jeep Mountain.

It’s notable that while Jeep led the way in offering a test track at auto shows, the brand is now forced to stay outside, while the non-polluting electric brands are able to offer test drives in the climate-controlled show hall.

In the ever-changing spring weather, having to stand in a line outside could be a detriment to Jeep's goal, which is ultimately the same at every automaker: Get consumers' butts into the driver's seat.

This year’s New York International Auto Show ought to accomplish that goal in spades.