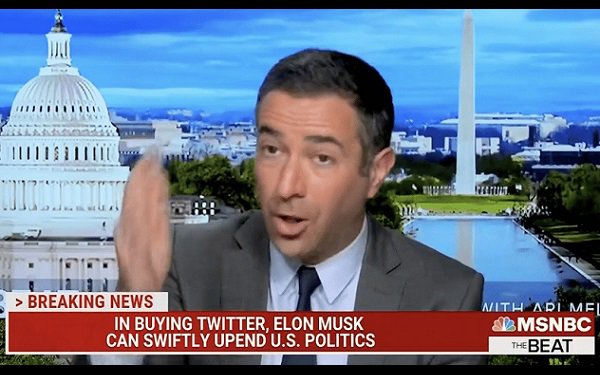 Elon Musk’s takeover of Twitter is the issue du jour on the battling cable “news” channels.

One of the skirmishes concerns something that MSNBC host Ari Melber (pictured above) said Monday about how he predicts Musk will use his newfound power to stifle this or that side in our partisan politics.

The relevant passage has been quoted all over the place. “[When] you own all of Twitter or Facebook or what have you, you don’t have to explain yourself,” Melber is quoted as saying.

Not surprisingly, this drove conservative media to states of apoplexy as they pointed out that Twitter did just that when it banned Donald Trump, although it was not in secret.

Certainly, many people on both the left and right think Trump was and still is nuts, but he was the president of the United States when this social-media site with a cartoon name decided he was not worthy of inclusion in the august environment it had created for free speech -- as Twitter defines it.

Even before Melber’s comments this week came a now-infamous Washington Post op-ed piece April 8 (just after Musk was named to Twitter’s board, but before he took over the whole thing) in which guest writer Ellen Pao made a number of dire predictions about how the world will suffer when or if Musk gets the opportunity to put his stamp on the site.

The most laughable part was this: “Musk’s appointment to Twitter’s board shows that we need regulation of social-media platforms to prevent rich people from controlling our channels of communication.”

This sentence made Pao and the Washington Post an easy target because the Post, which happens to be a “channel of communication,” is itself owned by one of those rich people, Jeff Bezos. You can’t make this stuff up.

And it should go without saying, but Ms. Pao’s plea for some sort of “regulation” barring rich people from owning media properties is naïve. It is not exactly going out on a limb to say that this will never happen.

As for Twitter and its contents, the TV Blog sees nothing wrong with the site’s more benign uses such as promoting this blog with a tweet on the morning it is published.