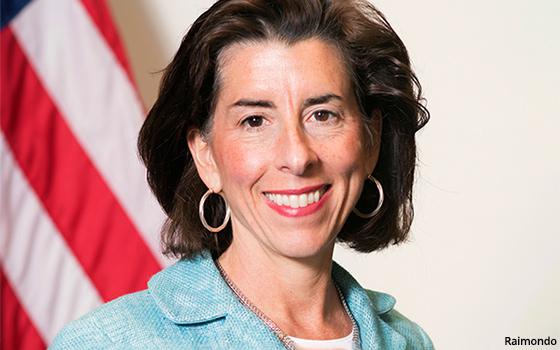 Commerce Secretary Gina Raimondo on Wednesday endorsed an antitrust bill that would prohibit large tech companies from favoring their own products or services.

Testifying at a Senate Commerce Committee hearing, Raimondo noted that the Justice Department recently issued a letter in support of the American Innovation and Choice Online Act.

Raimondo then said that she, and the Commerce Department, agree with the “views expressed in that letter,” and concur with “the aim of the legislation.”

Last month, the Senate Judiciary committee advanced the measure, which would impose new restrictions on the largest tech companies. Among other curbs, the bipartisan bill would prohibit platforms with at least 50 million active monthly users from drawing on another business's data to compete against it. The bill would also ban those platforms from returning search results biased in their favor.

Lawmakers on the judiciary committee voted 16-6 in favor of the bill in February, but the measure is expected to be amended before it reaches the full Senate.

Some large tech companies, including Google and Amazon, oppose the legislation.

Kent Walker, Google's chief legal officer, said in January that passage of the bill could prevent Google from showing directions from Google Maps in response to searches for addresses.

But dozens of smaller tech companies -- including review site Yelp and search engine Duck Duck Go -- have publicly urged passage of the bill.

“Dominant technologies companies’ ability to give their own products and services preferential placement, access, and data on online platforms and operating systems prevents companies like us from competing on the merits,” Yelp and others said in a January letter to lawmakers.