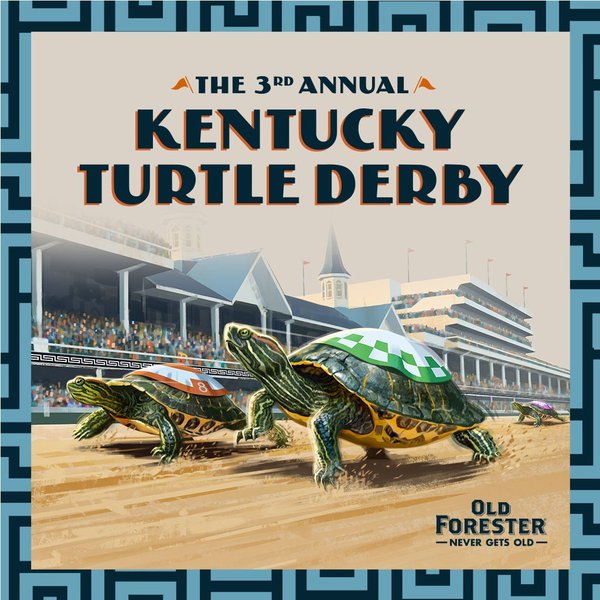 The first Saturday in May means the running of the Kentucky Derby at Louisville’s Churchill Downs -- and a celebration of the bourbon-based mint julep, the favored drink for viewers.

So you’d think that Brown-Forman’s Old Forester bourbon, whose Ready-to-Drink Mint Julep has been "the official drink of the Kentucky Derby" since 2015, would want you to watch NBC’s Derby coverage, which runs for five hours starting at 2:30 pm ET.

But, at 4 p.m., Old Forester instead wants you to tune into its YouTube channel. At that time, the third running of the Kentucky Turtle Derby will take place. The race will also be shown on a big screen at Churchill Downs and in more than 10,000 bars and restaurants via Atmosphere TV.

First held in 1945 during World War II, Old Forester resurrected the turtle race in 2020 when the regular Derby was delayed due to the pandemic. It’s now an annual event.

Horse racing was a gambling sport long before other sports took to the practice, and this year -- thanks to a partnership between Old Forester and DraftKings -– the Kentucky Turtle Derby joins the betting fray as well. Leading up to Saturday’s race, consumers can visit DraftKings to answer various questions about the turtles in the race, with those answering correctly splitting a $5,000 pot.

Back at the Derby, where Brown-Forman’s Woodford Reserve is the presenting sponsor as well as the official bourbon of the race (as opposed to the official mint julep), the racetrack will serve 130 $1,000 juleps in silver cups featuring red rubies in the shape of horseshoes. Or attendees can spend $2,500 each for 18 of the juleps served in similarly attired gold cups. All proceeds will benefit Old Friends Farm, a retirement home for race horses.

Kendall-Jackson wines will also be poured at all racetrack events, the brand said, and Kendall-Jackson Wine Estate & Gardens in Sonoma County will host an official West Coast Kentucky Derby celebration on Saturday. The event will include fashion contests, an on-site milliner, and Derby-inspired Southern cuisine paired, of course, with wines.

The Derby also has a large range of sponsors and licensees outside the alcohol category.

Red Bull, which joins the fray this year with a DJ booth in the track’s infield.

FTD, the race’s first floral partner, which will provide red rose-inspired floral arrangements throughout the racetrack, as well as a floral photography experience for social sharing moments.

GE Appliance’s Monogram brand, which will bring noted chef Marcus Samuelsson to cook bourbon-glazed chicken with peanut succotash on a savory pancake -- an event to be highlighted live on NBC.

Other Derby sponsors include Ford, Longines, and AIR, creators of personal eVTOL aircraft.