Nurses Rock, But Don't Give Them A Pet Rock To Show Your Appreciation 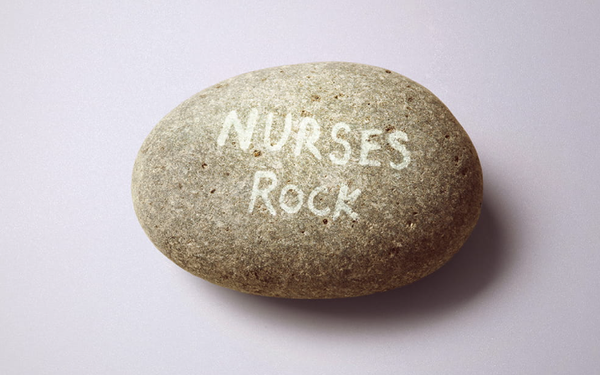 Remember those days during the height of the pandemic when people around the country would bang pots and give rousing cheers every evening in appreciation for the herculean efforts of front-line workers?

The U.S. nursing community is no longer feeling that love. In fact, 64% of them said in a recent survey that the typical ways in which employers show their appreciation seem patronizing,and 83% said they are under-recognized for their work. More than half say they intend to leave the profession.

This year, connectRN, a platform that connects nurses and certified nursing assistants with flexible work opportunities (and each other), is launching a creative campaign called “NursesWeakGifts” to bring attention to how underappreciated nurses feel. The work is from creative agency Mischief @ No Fixed Address.

The campaign is tied to National Nurses Week, May 6-12, which some nurses say is a joke given the recognition often received -- such as pet rocks (embossed with a “Nurses Rock” label) or lollipops (“for days that suck”). Here’s a sample of some of the less-than-cherished gifts given to nurses.

Through a series of videos that highlight common Nurses Week gift fails, connectRN encourages nurses to share a photo of their most ridiculous employer gifts on social media and tag connectRN. If they’re among the first 1,200 to submit, they’ll receive something a little more thoughtful than a pet rock, like gift boxes of scented candles, gourmet chocolates, and tea and mugs.

“We launched NursesWeakGifts to make the point that two years into the pandemic, nurses are working harder than ever and feeling underappreciated,” said connectRN CEO Ted Jeanloz. “Nurses are the backbone of the healthcare system, which would collapse without them.”

National Nurses Week, added Jeanloz “is a time to show nurses how much we appreciate them and remind employers out there to take a beat and think about a thoughtful way to acknowledge their hard work.”

More about the campaign can be found here.