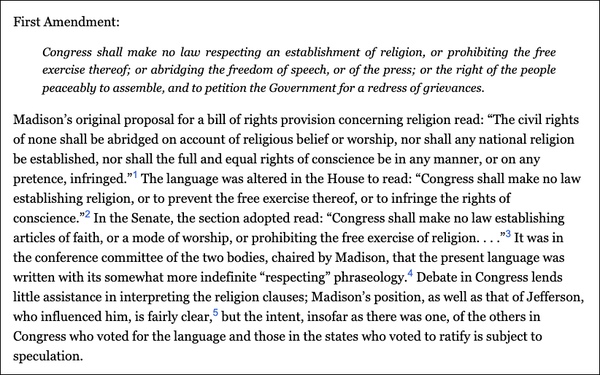 As pundits and media analysts debate the merits of the spin surrounding the leaked Supreme Court draft opinion likely to overturn Roe v. Wade, a much broader discussion should be taking place that speaks to the heart of the First Amendment. No -- not the part about free speech, free press and protest, but the first part about not having any laws based on the establishment of religion.

Because that’s what SCOTUS is likely to do if it allows states to make abortion illegal, because the majority of Americans -- you know, the ones who are supposed to decide in a democracy -- don’t believe it should be.

Such a precedent could lead to even more enforcement of religious beliefs based on gender, race, and other minority views that have nothing to do with a democratic process, but everything to do with a theocratic one in which the clergy rules. And not just any clergy, but some very fundamental ones.

A majority of Americans representing a wide range of religious and political views support abortion rights, and according to a new Ipsos study, two-thirds of Americans (63%) are likely to vote for candidates who support passing a law legalizing abortion to replace Roe if SCOTUS strikes it down.

On the bright side, the ruling is likely to energize a base of voters who would turn out to exercise a democratic process, effectively striking down a theocratic one.