U.S. To Drive Doubling Of Global AVOD Revenues, To $70B, This Year 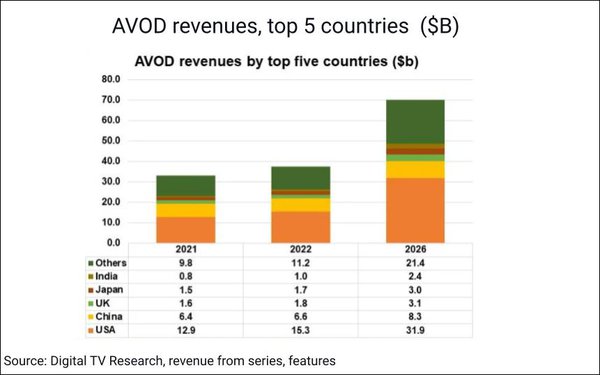 Global ad-supported video-on-demand (AVOD) revenues from series and features will more than double this year, from $33 billion to $70 billion, projects Digital TV Research.

The U.S., with “the world’s most sophisticated advertising industry by some distance” and greater content choice than in any other market, will remain the dominant AVOD market, notes Simon Murray, principal analyst at Digital TV Research.

China’s AVOD revenues slumped in 2020 due to its economic downturn, and the government’s clampdown this year on fan-based culture greatly reduced reality show releases from the OTT platforms and dampened viewer demand, according to the analysis. As a result, it will take until 2024 for China to better its 2019 total.