Gartner: Artificial Intelligence More Important Than Metaverse To Most CEOs 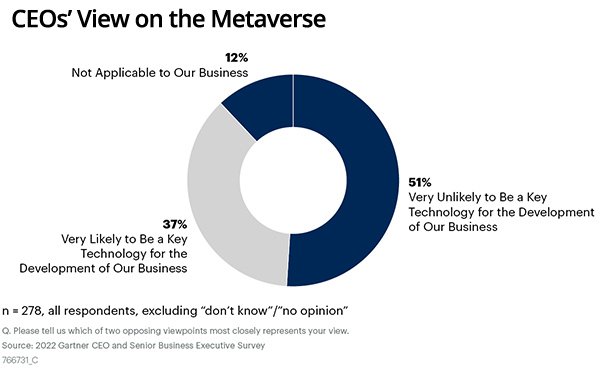 The metaverse might be the latest buzzword for the advertising industry, but as it turns out, most CEOs participating in a Gartner survey ignore the technology. They want to avoid wasting effort on concepts that are many years from offering substantive value to the enterprise.

Artificial intelligence (AI) is reported as the most impactful new technology among CEOs for the third year in a row, according to Gartner.

Some 63% of CEOs see the metaverse as either not applicable or very unlikely to be a key technology for their business, despite Gartner’s February prediction that 25% of people will spend at least one hour per day in the virtual world by 2026.

The remainder think it will be a key technology for the development of business.

This survey of 410 actively employed CEOs, and other senior executive business leaders investigates the views from end-user industries outside the tech sector. It was conducted to examine thoughts on current business issues between July 2021 through December 2021.

For the first time ever, CEOs place environmental issues and sustainability in their top 10 business priorities. Some 74% agreed that increasing environmental, social and governance (ESG) efforts attracts investors to their companies.

Of the 80% of CEOs who intend to invest in new or improved products this year and next, environmental sustainability was cited as the third-largest driver, just behind functional performance and general quality.

Sustainability also appears to be a competitive differentiator for CEOs in 2022 and 2023. It is on the same level as brand trust among respondents.

Companies still find it challenging to locate and hire top talent. Workforce issues such as talent retention moved up in priority for the second year in a row, only slightly behind technology-related issues such as digitalization and cybersecurity, and significantly ahead of financial issues such as profitability and cash flow.

About 62% of CEOs see general price inflation as a persistent or long-term issue.

The “d” word, digital, has become to mean almost anything related to the use of data and microprocessors. When asked about their attitude toward digital change in their business, 54% said they are maintaining their newfound pace, while 34% pointed to reaching even further in their vision and ambition. A small number, 11%, thought they could afford to slow or pause digital change, following the rapid advances made during the pandemic.