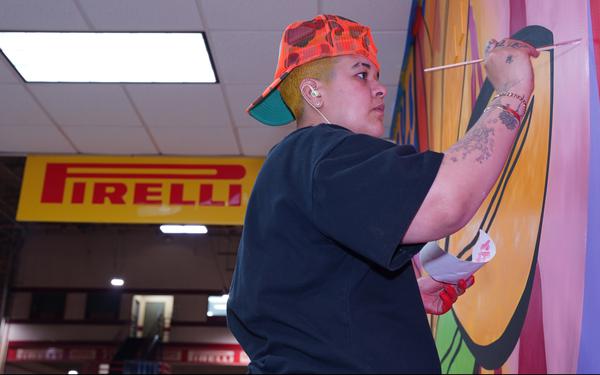 Pirelli’s 2021 annual report continues the tire brand’s tradition of collaborating with artists and writers to bring arts to the automotive world.

This year, the brand chose to focus on factories as places of production for art and culture, but also for inspiration and beauty,

Pirelli invited artists to visit five of its 18 production sites and create works of art inspired by the sounds, colors and atmosphere of the factories: from Settimo Torinese, Italy to Yanzhou in China to Campinas in Brazil to Slatina in Romania.

Titled “A Beautiful Place: The Art of Manufacturing,” the effort also includes a collaboration with Atlanta artist Lisette Correa (also know on social media as arrrtaddict) as she designed a mural within Pirelli’s manufacturing facility in Rome, Georgia which is also celebrating its 20th year of operation.

Correa posted about the partnership on Instagram, where she has 11,400 followers.

“The contributions are always from artists, writers and personalities from the world of culture of an international level, who bring insights that are often unexpected and entertaining,” Abet tells Marketing Daily.

Even before the annual reports, the brand collaborated with artists as part of a long traditions. Its innovative ad campaigns in the 20th century and its distinctive long P logo are a few examples, according to Pirelli.

“We see working with artists as a way of getting a glimpse into the future," Abet says. "A great artist can capture emerging ideas and trends before the rest of us see them and so provide clues as to where we are headed in terms of societal change, emerging lifestyles and customs.”