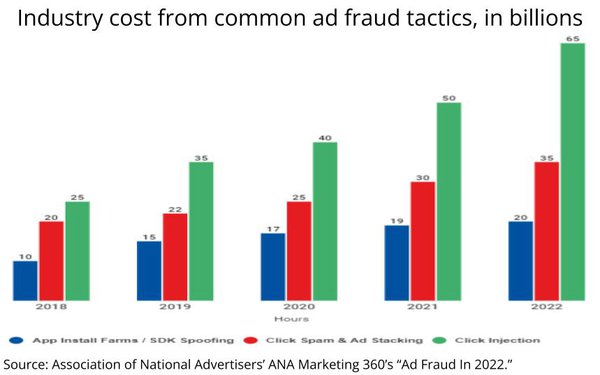 Editor's Note: Citing that its analysis was based on dated data that "did not properly reflect the current situation regarding ad fraud," the ANA has killed a link to it and that now dead link has been removed from this article. An addendum explaining that has been published here.

The cost of various forms of advertising fraud -- including app install farms, SDK spoofing, click spam & ad stacking, as well as click injection -- is projected to be $120 billion in wasted media buys in 2022, up 21% from 2021, according to an analysis published by the Association of National Advertisers.

The analysis, which was published in the ANA's Marketing 360 newsletter, included a variety of other estimates that project nearly as high growth of various forms of ad fraud -- including a Juniper Research analysis estimating that ad fraud costs advertisers $51 million a day, "and these losses are likely to increase to $100 billion annually by 2023," ANA Senior Manager of Research and Innovation Josch Chodakowsky writes in the analysis, which draws on studies published by The Atlantic, Forbes, HubSpot and others.

"In fact, nearly 18% of all internet traffic in the marketing industry can be attributed to nonhuman bots, which are actively engaged in ad fraud," Chodakowsky continues, noting: "With the U.S. being the biggest market for ad fraudsters, the issue has now been recognized by digital media professionals as one of the major challenges facing the industry, alongside third-party cookie deprecation."