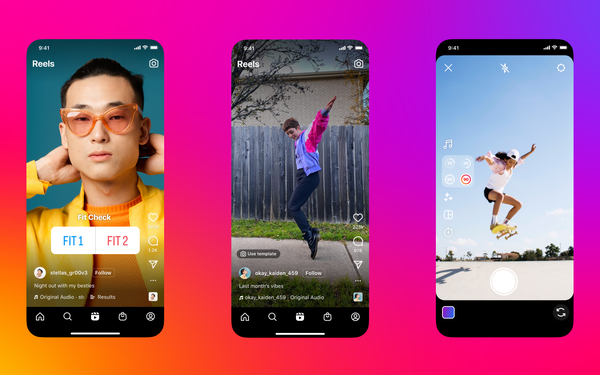 Short-term video feeds are dominating social media platforms, with TikTok and its 1-billion-plus monthly global users being the one to beat.

To compete, Meta announced on Thursday that Instagram and Facebook Reels –– its short-video option and fastest-growing content format –- will be updated with a range of new creative tools including audio-editing options, new interactive stickers, longer clips, and more.

Users are now able to create 90-second Reels clips -- which is up 30 seconds from its original 60-second limit.

While short videos have had major success in capturing online audiences –– especially GenZ users –– allowing longer videos falls in line with TikTok’s recent ethos, after it expanded its video length in July to 3 minutes, and then to 10 minutes in February.

Other new Instagram Reels tools include a slew of popular Stories stickers including poll, quiz, and emoji slider stickers, an Import Audio feature that gives creators the ability to import original audio to any 5-second-plus video directly within the Reels format, and Templates, which enables users to pull in the audio and clip sequence from their favorite Reels and customize it with their own content.

With Facebook Reels, users can now create, edit, publish, and schedule Facebook Reels from their web browser through Creator Studio.

A variety of video clipping tools are also available on desktop, which allow users to generate short-form Reels directly from their Live content and cut Live clips to a vertical 60-second format with dual views for gameplay and creator cams.

Creators can now narrate their videos on Facebook Reels, and with Sound Sync, automatically sync their video clips to the beat of a song.

Finally, Meta is boosting Reels discovery by placing them in additional recommendation feeds across its apps.

This means rolling out suggested Reels in Feed globally to help creators get discovered by new audiences and expanding Reels to Watch globally, so that Facebook Reels appear in Feed, Groups, and Watch. Instagram users can now recommend their Reels on Facebook to expand the reach of their content.