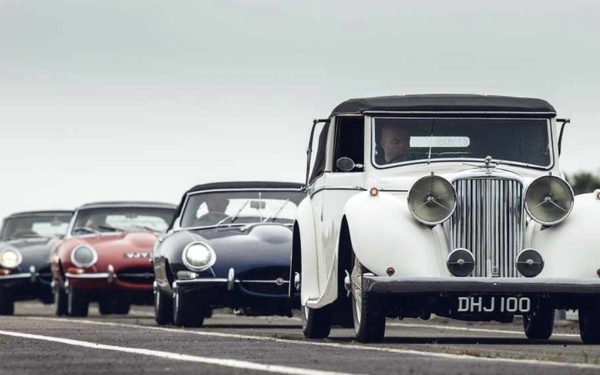 More than two dozen Jaguars and Land Rovers were featured in the Platinum Jubilee Pageant, including two of the queen’s Land Rover Defenders, along with three Jaguar and Land Rover vehicles from James Bond films, and a collection of rare convertibles such as a bespoke 1965 Series 1 E-type Roadster.

Other Jaguar and Land Rover vehicles of note participating in the pageant included the first Land Rover the world ever saw, unveiled at the 1948 Amsterdam Motor Show. Andn a celebration of Jaguar’s move towards an all-electric future, the parade featured an F-Pace electric hybrid.

The parade and pageant took place Sunday, and was the last of several events held to commemorate the queen’s 70-year reign.

The British automaker is also donating an SUV, the Defender 130, to be given to the British Red Cross to support its operations in the UK.

Land Rover engineers will work with representatives from the charity, of which the Queen is a patron, to adapt the vehicle before it goes into service. Land Rover has supported the International Federation of Red Cross and Red Crescent Societies since 1954.

Land Rovers have figured in the queen’s history throughout her reign. She has a fleet for her usage and reportedly dispatched one of them to pick up Prince Harry and Duchess Meghan as the couple arrived for the celebrations, according to news reports.

Land Rover received its first Royal Warrant in 1951 from King George VI, who had tried one of the company’s very early models in prototype form. In the same year Daimler, which became part of Jaguar in 1960, also received a Royal Warrant from Her Majesty The Queen, who was to become The Queen Mother.

Other companies that had a presence in the festivities included Diageo, whose brands include Justerini & Brooks, along with Johnnie Walker, Pimm’s, Royal Lochnagar, Tanqueray and Gordon’s.  Burberry, Charlotte Tilbury and Moët & Chandon were among the sponsors of the pageant.