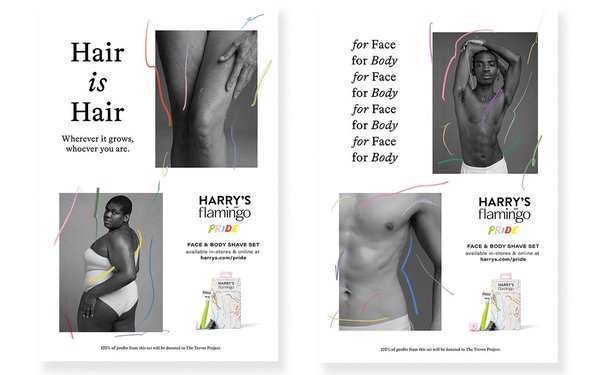 Harry’s, the men’s grooming brand, has always kept campaigns for Flamingo, its women’s collection, separate. But to celebrate Pride month -- and the basic biological reality that a hair is a hair, no matter where -- it’s running its first joint campaign and product promotion.

Marina Cashdan, head of creative and communications at Harry’s, tells D2C FYI that the decision to do the first joint campaign came from her thinking harder about how shaving products “have always lived in a pretty binary space.”

Harry’s, which started offering D2C subscriptions back in 2013 and introduced the Flamingo women’s brand in 2018, did too.

“It felt like time for us to acknowledge that people aren’t so 'choose either A or B’ about razors,” Cashdan says. “It’s much more fluid than the personal care industry has represented.”

The point of the campaign, she says, is that “hair removal should be comfortable and supportive and inclusive, no matter your gender.”

Harry’s chose portraits based on the insight that so many people in the LGBTQ+ community still feel invisible. Photographs “show them portrayed in a way that is humanistic, beautiful and elegant -- but still fun, playful and celebratory.”

And to inject some splash of Pride, she says images on the packaging will include lines of color drawn over the portraiture, “adding vibrancy and movement.”

Themed “Hair is Hair,” the effort leans heavily into out-of-home as more Pride events return to in-person. That includes LinkNYC kiosks and wheat-pasting.

And while the campaign will appear on digital and social on the national level, “it presents an amazing opportunity in our hometown of New York, to show up physically as much as possible,” she says.

Posters will be especially visible along the route of the New York City Pride March.

For many, Pride is taking on a particular poignancy this year, given the more than 200 state bills aimed against the trans community.

“We want to continue to support this community that has gone through so many ups and downs,” Cashdan says.

All proceeds from this year’s specially Pride-themed set of products go straight to the Trevor Project, as they have for the past four years.

Last year, Harry’s generated $400,000, and its total donations to the group are $1.1 million. It’s also given $8 million to support access to mental health resources, helping some 900,000 men, especially in at-risk veteran, LGBTQ+ and Black communities.

“It’s important to us that our audience sees that to us, Pride is not a one-and-done kind of thing, but that we work with the Trevor Project all year long,” she says, adding that the company strives to see its efforts not so much as marketing campaigns, but as a commitment.