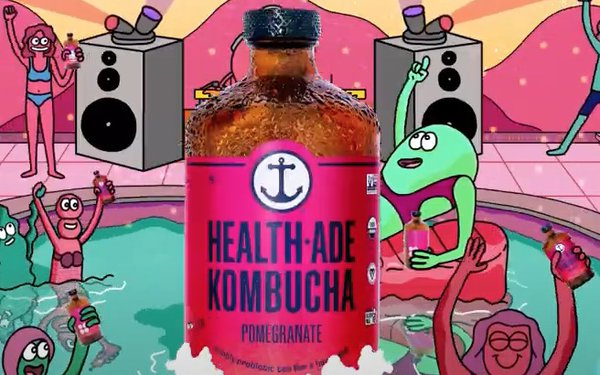 If your gut is happy, so are you. That’s the simple message from kombucha beverage brand Health-Ade.

The new “Get That Good Gut Feeling” campaign is a departure from Health-Ade’s previous, education-focused advertising aimed at explaining the physical benefits of substances like probiotics in kombucha.

Instead of people explaining the ins and outs of gut health, the campaign from Emmy award-winning illustrator and animator Mike Perry and the Zambezi agency uses animated characters to associate kombucha with fun times.

This 15-second spot opens with a Health-Ade product shot before shifting to multiple beachside characters cavorting on land and water as the voiceover explains how “your gut can be its best at the barbecue—and pretty much anywhere else.”

The approach is similar in this spot, which explains how Health-Ade’s kombucha probiotics make “your gut your happy place. Especially if your happy place includes nachos.”

In the third campaign video, a “little probiotic boost” for the gut is offered up as a remedy to overindulgence to make it seem “like last night never happened. Or maybe like it never stopped.”

Despite a rising awareness of the importance of gut health, there’s still a need to explain how kombucha fits in, according to Health-Ade vice president of marketing Charlotte Mostaed.

“About half of consumers don’t know what kombucha is or what it really does for their gut,” Mostaed tells Marketing Daily.

Thus the campaign’s simplicity and focus on probiotics.

“We know that most people understand probiotics are good for their gut, so just by using that word we’re signaling it. We learned that when we bit off too much in the previous campaign and tried to explain how the gut ends up impacting mood, immunity or skin health.”

Although Health-Ade has gained distribution in more than 50,000 U.S. stores since its launch in 2012, many people are afraid of kombucha or “think it’s maybe a niche functional health beverage that doesn’t taste very good,” adds Mostaed.

The company’s goal is to make kombucha “a household mainstay—similar to how you have orange juice in your fridge, we want you to have your kombucha in the fridge. Our household penetration has a ton of room to grow,” Mostaed says.

In addition to commercials on digital platforms, “Get That Good Gut Feeling” is being communicated via digital billboards in select metro areas and airings on podcasts and radio stations.