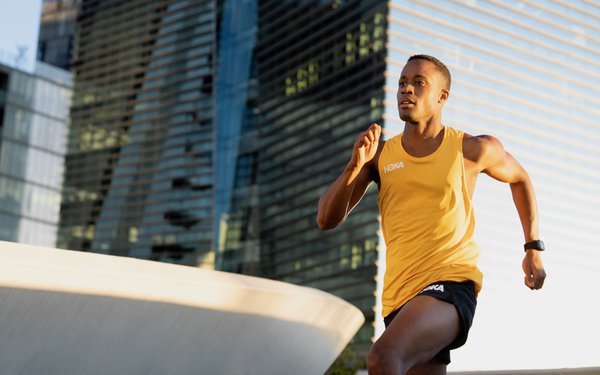 Runners can expect to see lots more Hoka One One shoes zipping by: The red-hot sneaker brand is introducing "Fly human fly," its first ever global ad campaign.

Created by FCB, the new effort comes as high-end performance running shoes are having a  moment. Yet mainstream brands -- including Nike and Adidas -- are losing ground.

In the first quarter of this year, the NPD Group says retail sales of U.S. footwear slipped 3%. Women's kicks gained 4%, but men's fell 6%. Adidas, Nike and its Jordan brand all underperformed. Hoka, Reebok, Skechers and Puma all gained.

In Hoka's case, "gained" is an understatement. Launched in 2009, the brand's thick soles were seen as a reaction against the then-popular "barefoot" running approach. It's been steadily gaining fans since, especially among endurance athletes.

In its recently released results, parent Deckers Brands said Hoka's sales jumped 60% to $283.5 million in the fourth quarter. And for its full fiscal year, Hoka sales advanced 56% to $891.6 million.

"When a consumer tries a HOKA product, they fall in love with our product innovation that delivers an experience that is both easy on the body and world-class fast," said Norma Delaney, vice president of global brand marketing in its announcement. Most growth has come from word-of-mouth.

"Those that know us are fans for life. The 'Fly Human Fly' global campaign is an invitation for humans everywhere to experience HOKA and fly into a world of new possibility," Delaney added.

In the first ad, runners hotfoot it through a cityscape, occasionally taking flight altogether.

The company says it is rolling the ads into 32 different countries, with video running on connected TV platforms and digital, as well as plenty out-of-home support.

The Goleta, California company says it is timing the effort to the launch of its Mach 5, which it describes as a mash-up of its Mach and Mach Supersonic shoes. The new model is "a lively 'pavement pounder,' perfectly suited to the Fly Human Fly ethos."

As part of the effort, it's also teaming up with Achilles International, a nonprofit that works with athletes with disabilities.

Running made a big comeback early on in the pandemic, when many people lost access to gyms and other workouts. But the boom seems to have staying power, with a Nielsen study last year finding that four in 10 people think of themselves as runners. Of those, 30% say they run at least weekly.