SCOTUS Reversals Ultimately Up To Voters, As Well As Ye Old American Media 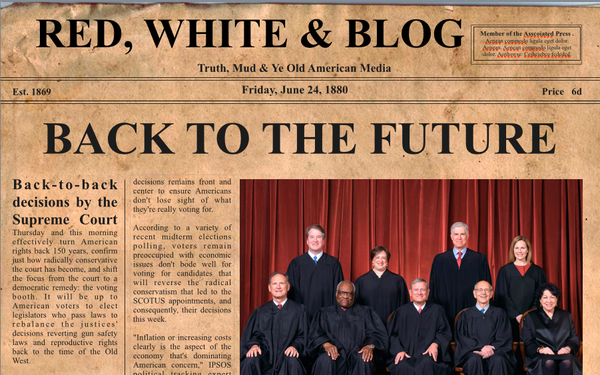 Back-to-back decisions by the Supreme Court Thursday and this morning that effectively turn American rights back 150 years confirm just how radically conservative the court has become, and shift the focus from the court to a democratic remedy: the voting booth.

It will be up to American voters to elect legislators who pass laws to rebalance the justices' decisions reverting gun-safety laws and reproductive rights back to the time of the Old West.

As President Joe Biden noted in his post-abortion ruling comments, it's now "on the ballot" in November.

It will also be up to the American media to make sure the consequences of these decisions remains front and center to ensure Americans don't lose sight of what they're really voting for.

According to a variety of recent midterm elections polls, voters remain preoccupied with economic issues, which doesn't bode well for candidates who might pass legislation remedying this week's SCOTUS rulings.

"Inflation or increasing costs clearly is the aspect of the economy that's dominating American concern," IPSOS political tracking expert Chris Jackson said during one of his periodic updates last week. "You can see, half of American list that as one of their main worries."

While the economic issues remain the overriding factor for the midterm elections, two issues that have been growing among American voters speak directly to this week's SCOTUS rulings.

"Crime or gun violence has substantially jumped," Jackson noted, "basically doubled in the number of Americans saying that's a worry." Importantly, that spike happened in IPSOS' May survey, just before the mass shootings in Buffalo, NY, and Uvalde, Texas.

"The only other thing that sort of climbed," Jackson noted, "is abortion, up six points.

"That, coming in the wake of a leaked draft opinion about the Roe v. Wade decision being potentially overturned."

So while voting still is "the economy, stupid," IPSOS tracking shows both gun violence and overturning abortion choice rights were rising before the court's decisions this week.

As of last week, Jackson didn't expect an abortion ruling to have a big impact on the elections, mainly because "the people who are fired up [Democrats] are already voting.

"It's an open question on how much abortion will be an effective mobilization tool," Jackson said, going on to note that a big challenge for Democratic candidates is that younger voters have become much more party neutral and independent that past generations.

Of course, younger voters have also spent their entire lives with a Constitutional right protecting choice and it will be interesting to see how they react now that it has actually been taken away.

Or as Biden concluded today's post-ruling remarks today, "With your vote, you can act. You can have the final word. This is not over."