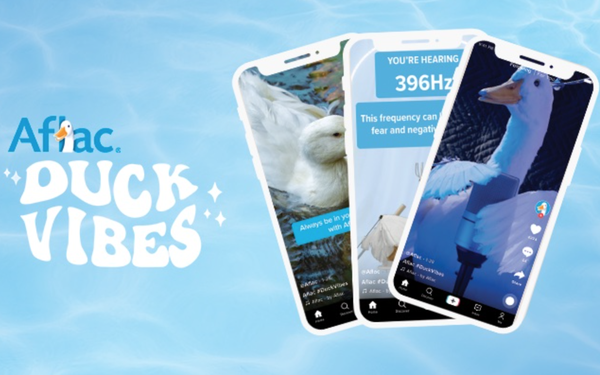 Aflac is capitalizing on the popularity of the quick video social platform with TikTok-centric creative.

Themed #DuckVibes, the work incorporates some common trends found on TikTok, including astrology, and healing sound frequencies to bring good vibes this summer.

The brand’s activation on TikTok is designed to meet the younger generation where they are and help raise awareness of how Aflac can bring them coverage for the unexpected, according to Garth Knuston, head of marketing at Aflac.

This campaign is a result of both the internal and agency team’s commitment to find “new, heartwarming and humorous ways” to engage with consumers, he adds.

“Aflac #DuckVibes taps into key trends and cultural moments that resonate with younger audiences on TikTok while still remaining true to what people expect from our brand and the Aflac Duck,” Knuston says.

Tied to the start of the Cancer zodiac sign season as well as the summer solstice, the campaign includes Aflac-branded affirmations and aesthetics tailored to each of the sign elements for insight on the unexpected protection Aflac can bring.

The campaign's first execution "Summer Affirmations" has already been viewed 897.1k times. Several more are planned. Consumers can also find the elements of the effort on other social platforms including Facebook.

The brand launched its TikTok channel in December and has posted 17 times, has 7760 followers and 12.4K “likes.”