In this year’s first quarter, 4.43% of all CTV programmatic marketplace ad calls were for fake content — including screensaver channels, photo widgets, games and mobile pretending to be CTV streaming content.

That’s according to the first CTV benchmarks report from contextual and brand safety data provider Peer39, based on an analysis of hundreds of billions of impressions in open-bid programmatic.

Across all CTV campaigns run in the quarter, the proportion of inventory running on fake content ranged from 2% to 18.5%.

In addition, unprofessionally produced content, such as ad-supported user-generated content, averaged around 13% of total impression volume per campaign.

The report notes the lack of programming transparency in CTV buys, in contrast to the traditional upfronts, where brands buy almost exclusively on the basis of programming.

The analysis confirms that series and movies dominate, with a 14% share each, with sports and news at a 7% share each, and recreation at 4%.

Live sports coverage, while increasing on CTV, still lags cable and broadcast in this area, notes the report.

In terms of overall impression volume by OTT service, Pluto TV is far out in front in overall impressions, with 59% in Q1, to runner-up Samsung TV Plus’s 18%. Philo is at 5%, LG Channels at 4%,and Hulu and Sling TV at 2% each, according to this data.

Among devices, Roku heavily dominates, at 41% in Q1, with Amazon Fire TV running a distant second at 26%: 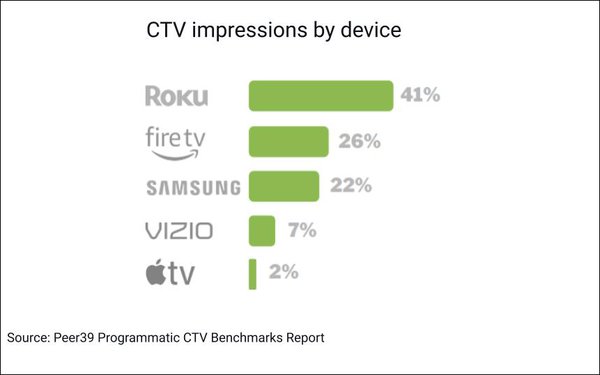