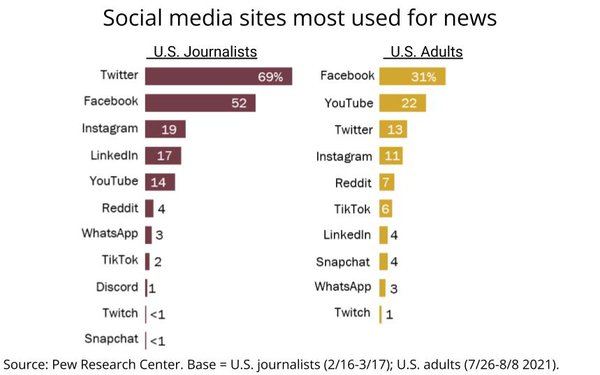 A new Pew Research study surveyed 11,889 U.S.-based journalists currently working in the news industry as reporters and editors, and showed that 94% of them use social media for their jobs. The specific sites that journalists used differed from social sites where the general public sought news.

Not surprisingly, Twitter was the highest-ranking social media site for journalists completing work-related tasks, with 69% reporting they use it the most or second-most for their job -- followed by Facebook at 52%, Instagram at 19%, Linkedin at 17%, and YouTube at 14%.

Reddit, WhatsApp, TikTok, Discord, Twitch and Snapchat were not named by more than 4% of the journalists surveyed.

Overall, 48% of U.S. adults surveyed said they often or sometimes get news from social media. Facebook was the most widely used platform, with nearly one-third of U.S. adults reporting they used it regularly for news, while YouTube ranked second with 22%.

Twitter was most popular among younger journalists, with 83% of those who identified as 18 to 29 years old citing the site as one of their most commonly used social platforms, while 45% of journalists over the age of 64 named Twitter as one of their top two social sites for work tasks.

Twitter ranked more equally as a top news site among journalists on both sides of the political spectrum -- coming in at 75% with a left-leaning audience and 66% with a right-leaning one.

It should be noted that Twitter has a far smaller user base than that of any other major social platforms mentioned above. While Facebook remains at the top of the spectrum, with close to 2 billion daily active users, Twitter only has 229 million.