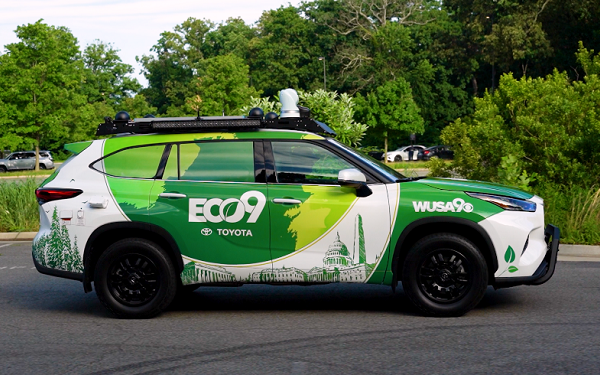 A local TV station’s partnership with a regional Toyota dealers’ group has produced a new kind of environmentally friendly live-news truck that the station says is the first of its kind in U.S. broadcasting.

The station is WUSA-TV in Washington, D.C., a CBS affiliate known as WUSA9 and owned by TEGNA.

The station’s innovative new truck -- introduced Monday morning and pictured above -- is a Toyota Highlander XLE Hybrid, an SUV.

Dubbed ECO9, the vehicle’s cost was not disclosed. But at least part of it is being provided by a sponsorship agreement with Washington Area Toyota Dealers.

Not only is the vehicle a Toyota, but the brand is emblazoned on the vehicle’s sides just under its name, ECO9.

“ECO9 is also made possible by Washington Area Toyota Dealers who are serving as launch partner and exclusive sponsor,” said an announcement from WUSA.

In addition to serving as a rolling billboard for Toyota, the truck’s distinction as a one-of-a-kind news-gathering vehicle powered at least partially by renewable energy is also a great p.r. tool.

WUSA can now promote itself as an eco-friendly member of the community that is doing its small part to combat climate change.

The launch of ECO9 was positioned in WUSA’s announcement with just that purpose in mind. “This technology ensures we are serving the greater good of our communities by sharing the important news of the day while simultaneously being responsible stewards of our natural resources,” said WUSA’s director of technology and operations, Rob Gibson.

The station’s announcement listed ECO9’s news-gathering equipment along with the eco-minded means with which the gear is powered.

All of ECO9’s broadcasting electronics -- including two fixed internal cameras and one 360-degree external camera -- are powered by a lithium-ion battery system “with supplemental charging from solar panels on the roof,” the station said.

Another feature of ECO9 that should make its community happy is its ability to operate for long periods without idling, which means it won’t pollute the local air like other trucks when they idle with their motors running and expelling carbon monoxide for hours on end.

“ECO9’s broadcasting system can operate continually with the truck’s engine turned off for six hours,” the station’s news release said.

The new truck was conceived by WUSA and custom-built by Frontline Communications, a Clearwater, Florida-based builder of custom trucks for television news and other specialty vehicles for law enforcement and emergency services.