CTV, As Well As SVOD, Faces The End Of The Broadband 'Gravy Train' 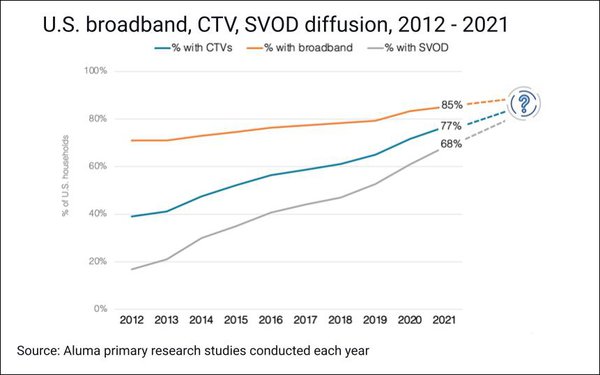 Further, as reported this week, Netflix’s domestic subscriber losses in the second quarter doubled, to 1.3 million (although Q2’s worldwide loss of 970,000 was better than the 2 million that Netflix had projected).

But the only truly shocking thing about this trend is that neither Wall Street or Netflix saw it coming, asserts Michael Greeson, founder and principal analyst of Aluma Insights, which advises creators, aggregators, distributors and others about connected consumers and their evolving video habits.

Based on nearly two decades of tracking consumer technology, Aluma started telling clients in 2012 that broadband’s diffusion would set the upper limit for growth of ancillary industries, so it was important to monitor its ongoing progress.

It was clear that the key structural trends that had long protected consumer technologies and services from economic downturns would weaken over time — in particular the rapid rates of diffusion, or consumer adoption, for broadband, connected TVs (CTVs) and subscription video-on-demand (SVOD) streaming services.

Because the expanding base of connected consumers was a boon for those corollary industries, “we argued that where broadband went, so too would uptake of home networks, wireless connectivity, and broadband-enabled devices and services," Greeson says.

By 2019, the firm was warning that the growth slowdown "was not only inevitable, but would happen sooner rather than later."

Just 35% of U.S. households had broadband as of 2005. By 2012, that rate had doubled. But in the decade since, growth has been “painfully incremental,” he points out. “It took COVID 19 to generate a meaningful spike in diffusion.” At year-end 2021, the U.S. household high-speed internet services penetration level was at 85%.

Mature products and services long dependent on broadband's continuing adoption growth are now bumping up against that saturation (although this isn't, for now, a strategic issue for newer services like Paramount+ and Apple TV+).

“The vast majority of those wanting broadband and streaming video already have it, and uptake beyond current levels will be increasingly cumbersome and costly,” sums up Greeson. “The broadband gravy train of the last two decades has mostly run its course.”

Saturation requires a shift in strategy from growth at all costs to optimizing revenue for the older services, he says.

And that requires changes such as the ones already being implemented by Netflix and others, including reducing operating costs, converting password borrowers to buyers, adding less expensive ad-free options for consumers, and possibly bundling among disparate networks as well as within a single network.