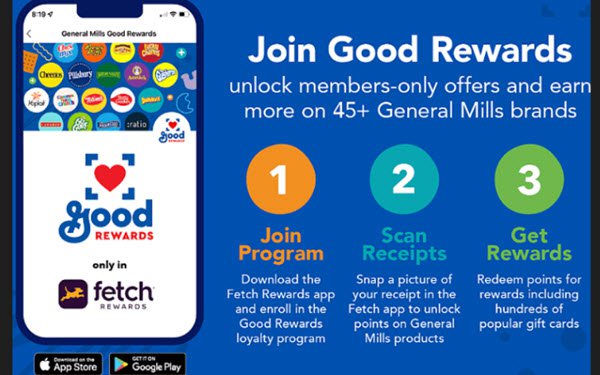 Following a few years of testing offers in the Fetch Rewards app, General Mills has launched a full-blown loyalty program with Fetch called Good Rewards, covering all of its 45-plus brands.

Among other benefits, residing within the Fetch app obviates the need for GM to have separate loyalty programs — and apps — for each brand and gives the CPG giant access to first-party consumer data.

Fetch users earn points by scanning retail receipts from online and brick-and-mortar store and restaurant purchases within the company’s Apple or Google Play app. Points can be redeemed for gift cards, charitable donations or Fetch merchandise.

Good Rewards members opt in to receive communications from General Mills that will form the basis of one-to-one relationships.

“Two years ago, we were 78% print and this year we’re 95% digital. So there’s been a pretty rapid transition in terms of how we’re showing up in that space.”

Retailers benefit when General Mills makes meal recommendations whose ingredients include one of the company’s products along with those from other companies.

“Quite frankly, it was a learning that we got out of one of our test programs that we weren’t expecting,” says Glaser. “We ran a program for a certain number of points on Pillsbury Crescent Rolls and with that we featured a recipe for a Pillsbury croissant pizza. It was a four-ingredient recipe. We saw that 36% of brand buyers who redeemed the offer also bought the other three ingredients.”

Receipt data from Fetch “is very complementary to and different from the POS data we get from some of our other sources,” Glaser adds. “We anonymize the data from the total Fetch audience. So, while we don’t email them personally, we can use their information to, say, build lookalike audiences for targeted digital ads.”

That changes with data gleaned from Good Rewards members, which is now yielding one-to-one relationships and “personalized plans that match their needs based on how they’re shopping every day,” he says.

Fetch launched a mass-awareness, brand-building campaign 11 months ago to fuel the next stage of its growth.

“You would never see General Mills be able to achieve that scale on their own, but together we can do that,” Schroll says.

"It’s consumers raising their hands and saying ‘Hey, I want even more from these brands,’” Schroll adds.

The impact of inflation and word-of-mouth awareness of Fetch are paying big dividends.

“We’ve actually slashed our marketing budgets recently by 40% or 50% because so much is coming in organically with people searching for how they can save money,” reports Schroll. “Our number one channel for new users is actually referrals. Consumers telling friends or family about the app accounts for [about] 65% of all of our consumers right now.”