Gamers' Acceptance Of Ads Is Mixed, But Tracking Is Deemed Dirty Pool 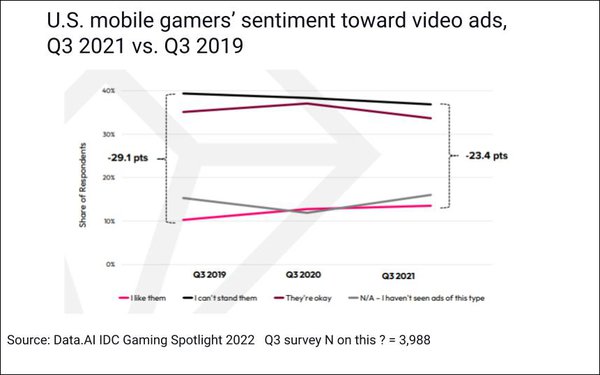 While mobile gamers’ acceptance of ads has improved somewhat, they are widely opposed to tracking by app publishers that monetize games with ads.

Those are the big takeaways from the 2022 edition of the Gaming Spotlight report from Data.AI (formerly App Annie) and IDC, fielded in November 2021 and released in May.

Fully half of 1,052 U.S.-based mobile gamers asked about tracking described tracking as “not fair at all” and 16% termed it “probably unfair,” despite awareness that it allows most apps to be free for users. A mere 3% view it as “very fair,” and 13% as “probably fair”; the rest (18%) were unsure.

More than half are “very supportive” (32%) or “somewhat supportive” of company and government efforts to make tracking harder.

Yet, most expressed full or conditional acceptance of ads in free apps. Nearly a quarter (22%) indicated that they would accept advertising in exchange for free content and services, 35% said it depends on the app, and 36% were unsure. Just 6% said that they’d rather pay for apps to avoid all ads.

“This puts app developers in a tough spot and implies Apple’s IDFA deprecation was pragmatic: most mobile users don’t want to be tracked individually and they want ‘free’ apps," note the researchers. This also “underscores the importance of having trustworthy third-party contextual market data to inform successful mobile strategies in a post-IDFA world,” they add.

Format-wise, video ads remain mobile gamers’ most-disliked ads — in part because they are the most prevalent format (84% of the nearly 4,000 U.S. gamers asked about ad formats reported seeing at least one of these ads in Q3 2021).

The picture is more positive when it comes to “rewarded” video ads — ones that deliver virtual currency or other items in return for watching them.

In fact, these ads had the highest positive sentiment among all ad types, indicating that gamers are willing to interrupt play to watch ads if it ultimately helps their gameplay.

Although the 23% reporting that they “like” rewarded ads was 8% lower than it was in Q3 2020, it was still slightly higher than the 20% who said they “can’t stand” them. About 76% of gamers saw at least one of these ads in the most recent survey period. 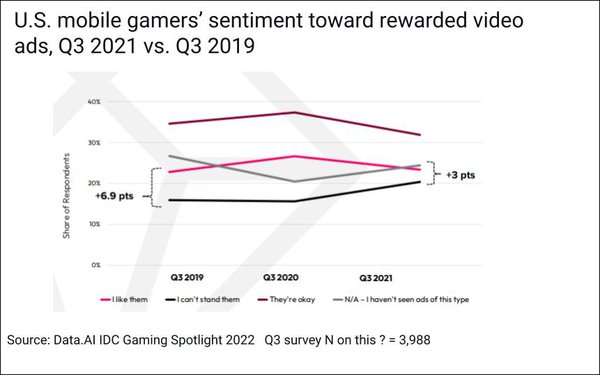 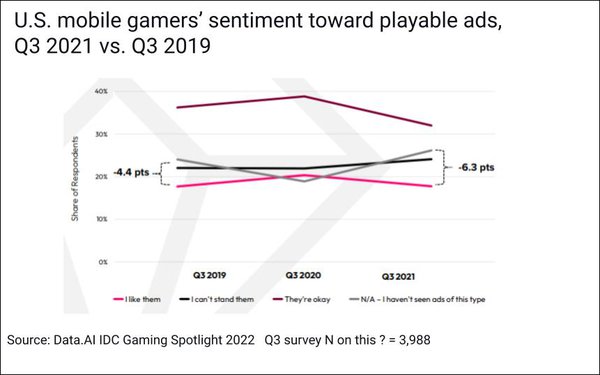 When it comes to in-game banner/display ads, about 30% of gamers still say they “can’t stand” them. 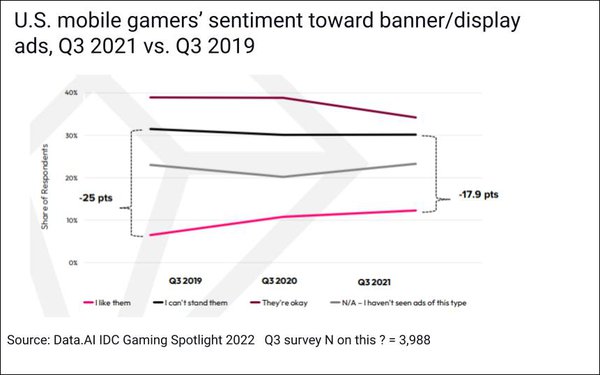