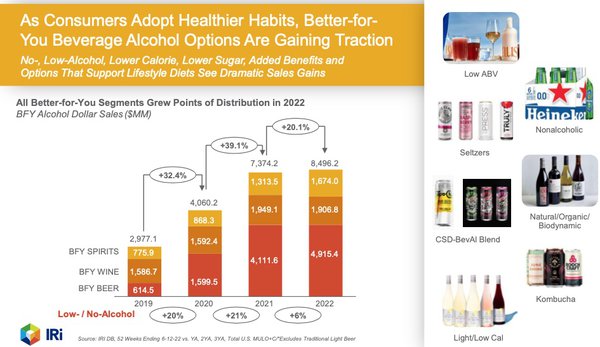 “Better for you” and ecommerce are two of the top trends in beer, wine and spirits.

The better-for-you movement is a reflection of consumers increasingly choosing non-alcohol beverages—including water and energy/sports drinks, according to a mid-year alcohol update from IRI.

What qualifies as “better for you” alcohol beverages?

Options like no- and low-alcohol, lower calories and sugar, added benefits and options that support lifestyle diets, according to IRI.

Beer leads the way in the better-for-you alcohol space, with dollar sales of $4.9 billion in the 52 weeks ended June 12 in outlets tracked by IRI

Better-for-you wines were #2 behind beer at $1.9 billionm followed by $1.7 billion for spirits.

One challenge that accompanies adding better-for-you benefits is the highly regulated alcohol landscape.

This was underscored by Alice Ponti, senior director of front end innovation at Anheuser-Busch, in a recent webinar by VentureFuel—which connects established companies with entrepreneurs and startups.

“Last year, we tested a beer meant to be consumed after a workout and that includes electrolytes and protein in Canada, with one of our biggest brands there,” said Ponti. “It did really well, but we’re not ready to launch in the U.S. given the current regulatory landscape.”

Regulation also hampers access to ecommerce across the board, because while wineries can ship D2C, distilleries are allowed to only in certain states, Florida-based lawyer Ryan Malkin observed during the webinar.

Malkin said he is working with the American Craft Spirits Association “to try to get on par with wineries because that would be huge for all of the distilleries across the country to be able to ship direct to consumers.”

According to IRI, ecommerce alcohol gains relative to brick-and-mortar transactions are most notable in spirits and wine.

According to an April survey of 1,004 adults ages 21+ in 33 states conducted for online liquor store Drizly, 17% of respondents said they would buy more tequila this year.

That compares with 10% who cited American whiskey, “which has been a longtime leader in the spirits category,” Drizly noted in a recent report.

Likewise, 43% said they were most interested in tequila-based, ready to drink cocktails compared to 35% for hard iced tea and 25% for CBD- or cannabis-infused drinks.

“Nearly 70% of Gen Z respondents, along with 56% of millennials, named tequila as their preferred spirit-base when shopping for RTD cocktails,” the report continued.

“Sales on Drizly paint the same picture—where margaritas have been the top-selling type of ready-to-drink cocktail over the past 5 years and currently hold 20% share of overall RTD category sales.”