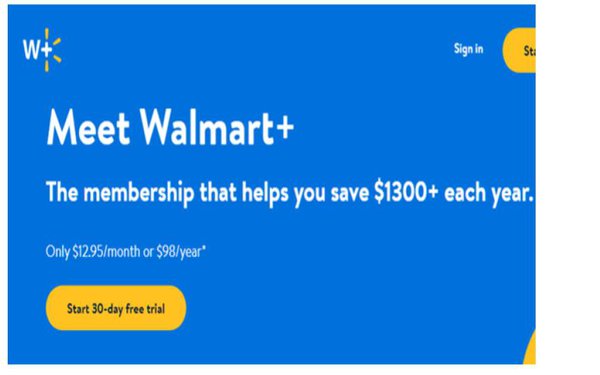 Walmart has been in talks with streaming players including Paramount (Paramount+), Disney (Disney+) and Comcast (Peacock) as it looks to add value to its Walmart+ membership package through streaming content, according to New York Times sources.

A $12.95-per-month Walmart+ membership includes free shipping on Walmart.com orders, free delivery of groceries and other goods from local Walmart stores (on orders of $35 and over), fuel discounts, special promotions and events, and a six-month Spotify Premium music subscription.

Walmart+ is up against Amazon Prime, the massive Amazon membership program that in addition to special deals and free shipping/delivery benefits, includes access to Amazon Prime Video, Amazon Music, games and books, and perks like unlimited photo storage,

In 2020 and 2021, during the pandemic-driven boom in ecommerce, Prime added about 60 million U.S. members, according to Consumer Intelligence Research Partners, a Chicago firm that tracks Prime members through consumer surveys. (The firm counts members, not subscriptions. Subs may each have multiple users/members.)

But U.S. membership as of June 30 this year was 172 million — the same as six months earlier. (Amazon recently reported having 200 million Prime members worldwide.)

“After years of steady and even explosive growth, Prime membership is flat,” Michael Levin, a partner in the research firm, told Bloomberg.

Walmart has been seeking ways to expand its in-store entertainment products clout online.

However, even Walmart has found that the costs of launching scalable streaming services in today's intensely competitive environment can be prohibitive.

After developing its own streaming service, Vudu, Walmart sold it to Fandango in 2020. Vudu continues to drive Walmart’s digital movie and TV store on Walmart.com.

Examples of free streaming subs being bundled into wireless offers include Verizon and Disney+, T-Mobile and Netflix, and AT&T and HBO Max.