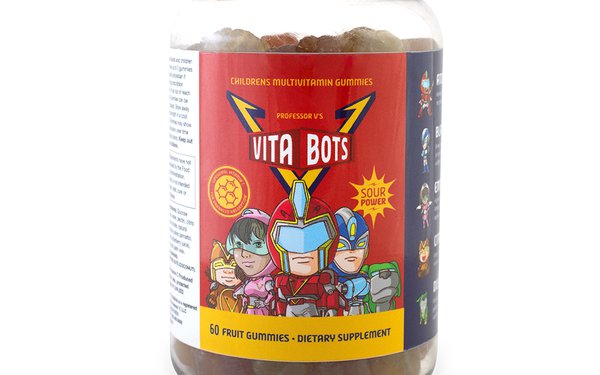 Vitabots, a brand-new children’s vitamin brand, has had no problem developing a good relationship with its ad agency. That’s because Los Angeles-based agency Arcana Academy is not only developing the brand’s creative. It also developed the brand itself.

Yes, Arcana is now directly in the CPG and D2C business, after having spent the past eight years developing Vitabots -- from sourcing its manufacturer (Vitasome Labs) to fulfillment and distribution.

The product, under a new entity called Professor V, LLC, is now sold through Amazon and plans “to remain direct to consumer for as long as possible,” Arcana creative director and co-founder Shane Hutton tells Marketing Daily. “We will likely begin targeting brick and mortar after our first 18 months.”

How and why did Vitabots come to fruition?

“We have regular ‘What's Your Best Idea?’ meetings at the agency. Doesn't matter if the idea is related to advertising or not. If we love it, we'll do it,” explains Hutton in the press release announcing the new product. “Well, nearly a decade ago, a big idea came through: a better children's vitamin.”

We’ll let the Arcana-created Vitabots website  pick up the story from there:

“Our story begins in the lab of Professor V, a selfless doctor who works tirelessly to find a way to provide proper nutrition to children around the globe.

“When Professor V’s groundbreaking formula of nutrient-delivering, nano liposomes garner him worldwide success, his ex-colleague and rival Dr. Osteo goes mad, stopping at nothing to rid the world of Professor V’s work.

“In response, Professor V creates the Vitabots, a team of super robots whose main function is to stop Dr. Osteo’s nefarious plans, ensuring the health and safety of the world’s citizens.”

In non-kids speak, explains Vitabots, “the Vitamin C is wrapped in a cloaking device that makes your white blood cells just think it's a normal everyday cell. The result is way better absorption of the Vitamin C. They are also delicious, made with organic ingredients, gluten-free, and don't have that chalky Vitamin-y taste.”

The agency is first promoting Vitabots on Amazon and social channels, and hopes to start paid media in three to six months.

Merchandising the Vitabots characters that it has created, Arcana also plans to sell a coloring book and a set of action figures.

“Professor V’s Vitabots,” as the brand’s label puts it, is currently selling for $31.99 on Amazon. That gets your kids 60 fruit gummies boasting of “Sour Power.”

One- to three-year-olds should take one gummy daily, and kids four and up two gummies.

If you’re talking about just one gummy, incidentally, we’d suggest not calling it a Vitabot, which is an entirely different company  in the private-label online meal planning business.