Google Details Media Buys For Apple 'Get The Message' Campaign 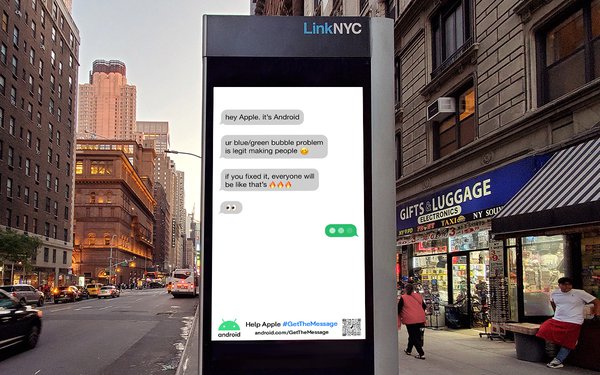 Google has expanded on the details of its Get The Message campaign targeted at Apple that launched earlier this week.

It addresses the green and blue bubbles problem in text messages as well as other common challenges in cross-platform messaging such as low-quality photos and videos, broken group chats, no texting over WiFi, end-to-end encryption, read receipts, typing indicators, and more, and explains how Apple can help solve these issues by adopting Rich Communication Services (RCS).

Google's Android division is also working with celebrity influencers like Keke Palmer, Vanessa Hudgens, and Madelaine Petsch to promote the campaign on Instagram and Twitter and highlight how messaging should bring people together -- not pull them apart.

Following today’s launch of creative across digital, this campaign will fully launch on August 25 in New York City on more than 500 digital and static billboards throughout Manhattan and Brooklyn.

Adrienne Lofton, global vice president of integrated marketing, platforms and ecosystems, believes messaging is how people stay connected with families, allowing "friendships to feel close enough to touch no matter how far apart they are, and how we get things done."

Sending photographs and videos between people using iOS and Android platforms is challenging. I know. I use an iPhone device, and my husband uses an Android. Each time I want to share a video or image, I need to send it to his email and hope for the best. I have tried for years to get a clean image to send via text message, to no avail.

"Any platform that isn't built to bring people together simply doesn't represent the level of seamless communication and modern technology people deserve and expect," Lofton wrote in an email. "This campaign is intended to deliver a clear call to Apple to finally join us in adopting the latest messaging standards that provides the best possible messaging experience for everyone, both on iOS and Android.”