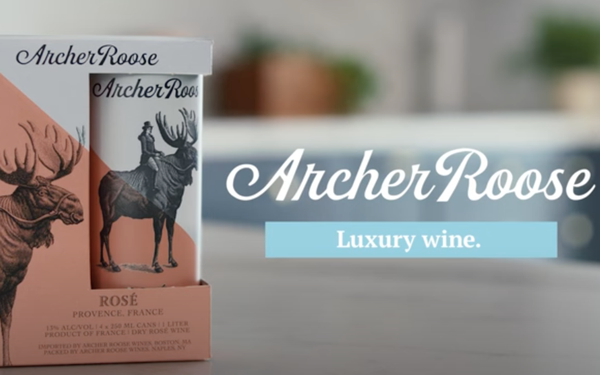 Constellation Brands keeps pouring on the wine, but apparently has no taste for aperitif.

The company just acquired a minority stake in Boston-based, eco-friendly wine brand Archer Roose as part of its Focus on Female Founders initiative.

But Constellation’s planned backing of low-alcohol aperitif brand Haus, which was founded in Sonoma County, California in 2019, reportedly has fizzled out.

Archer Roose is the latest investment by Constellation in wines—a portfolio that includes Meiomi, Kim Crawford Illuminate and The Prisoner Wine Co

Canned wines from Archer Roose are produced via partnerships with small wineries around the world and cover such varietals as Rosé, pinot grigio, sauvignon blanc and malbec.

The wineries do not use animal fining or clarifying agents—which can include blood and bone marrow—or added sugars or artificial colorings/flavorings. Their grapes are farmed without herbicides or pesticides.

Actress and producer Elizabeth Banks (seen in this ad) is an investor in Archer Roose and its chief creative officer.

At Constellation’s annual meeting last month, it outlined its ambition to be “the #1 player in fine wine and among the top five in ultra-luxury and icon wines."

All-natural ingredients are also a differentiator for D2C wine brand Haus, which markets aperitifs that are positioned in between hard liquor and regular wines on the alcohol spectrum.

The company touts itself as an alternative to “huge liquor companies that spend big to get their products on store shelves and in bars. And you’re stuck with their choices—sketchy ingredients, too much alcohol, outdated aesthetics and too many hangovers.”

Last week, Haus CEO and co-founder Helena Price Hambrecht posted on Twitter an update that was “not fun to share.”

According to Hambrecht, Haus’ lead investor in a planned, $10 million Series A fund raise has pulled out and, as a result, “we do not have the cash to support continued operations at this time.”

She went on to explain that the company is in a liquidation process that could result in its sale in whole or in parts.

TechCrunch identified the potential lead investor as Constellation, which has not commented publicly.

Marketing Daily reached out to Constellation, but the company declined to confirm or deny the potential Haus investment.