The Case Of The 3 Talking Deerheads 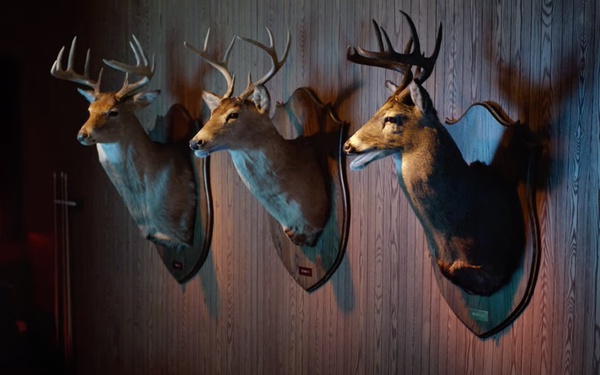 That’s because bratwurst is “almost exclusively grilled,” and the lawn game cornhole has become a common activity in backyard get-togethers, according to Johnsonville senior director of strategic growth Jamie Schmelzer.

For the third year as ACL’s presenting sponsor, Johnsonville rolled out a wide menu of on-site experiences during the Aug. 5 SuperHole II quarterfinals and finals broadcasts on ESPN2.

This spot featuring wall-mounted deer heads—each alternately pronouncing one of the three syllables in Johnsonville—contains no call to action or product images.

“A fun way to get people to remember our name would be the simplest way to describe it,” says Schmelzer.

Likewise, a commercial in which a QR-code-adorned bratwurst changes color while bouncing around the screen does not alert viewers they could scan the codes for the chance to win a year of free sausage—except for “SAUSAGEQR.COM” superimposed at the very end.

“A creative director I used to work with used to say that sometimes the loudest thing you can put on television is quiet. So it’s a very quiet spot. It’s a little confusing, a little intriguing,” says Schmelzer.

So much so that when ESPN2 received the spot,“they came back to us and asked us if it was done. And we said ‘yeah, it’s done.’

“We found out that over 10,000 people actually scanned the QR code.”

Family-owned Johnsonville sells more than 70 sausage varieties across 45+ countries and in more than 140 professional, semi-pro and college sports stadiums in the United States.