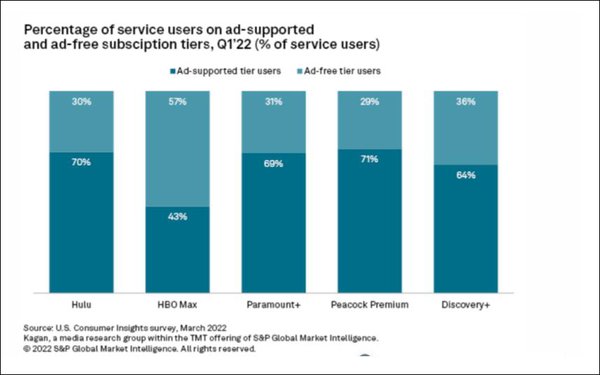 While Netflix and Disney are obviously calculating that introducing ad-supported versions of their streamers will ultimately strengthen their overall financial scenarios, new research from Kagan suggests that losses of premium-paying subscribers could significantly eat into their new advertising revenue streams.

The research underscores the dominance of ad-supported tiers in cases where they are offered as an alternative to higher-priced no-ads versions, and confirms that their appeal is far from limited to lower-income households, or any particular age group. In fact, those correlations are by and large faint.

“Given the popularity of ad-supported plans, operators such as Disney and Netflix that are launching ad-supported plans may not see a mass influx of new subscribers and could instead see a sizable number of existing subs switch to ad-supported offerings,” sums up the Kagan analysis, based on a Consumer Insights survey of 2,519 U.S. internet adults fielded in March.

One likely driver of this pattern: “Most SVOD services with ads keep streaming ad loads at about three minutes to five minutes of ads per hour of viewing — far lighter than linear TV ad loads that can exceed 10 minutes per hour at some networks,” observes the report. “Consumers accustomed to heavier linear ad loads may not be that bothered by comparatively light streaming ad loads and are simply shrugging and choosing ad-supported plans to save a few bucks each month.”

About 65% to 70% of users at Hulu, Peacock Premium, Paramount+ and Discovery+ reported using ad-supported plans (chart top of page). The exception was HBO Max, at 43%, but since the ad-supported option didn’t launch until June 2021, more users may migrate to it over time.

Peacock’s pattern is actually the reverse, with more lower-income homes choosing the ad-free plan and higher-income homes opting for ad-supported. (Like Discovery+ and Paramount+, Peacock Premium costs $4.99 with ads, $9.99 without.) 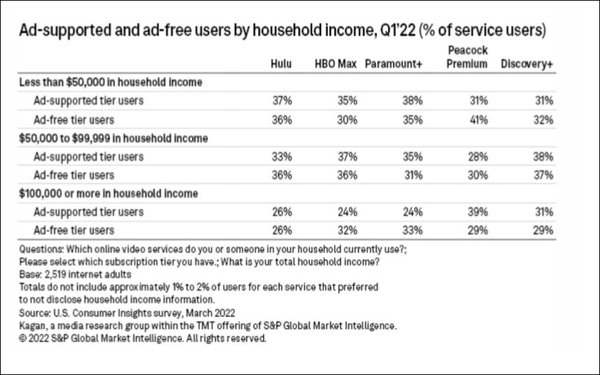 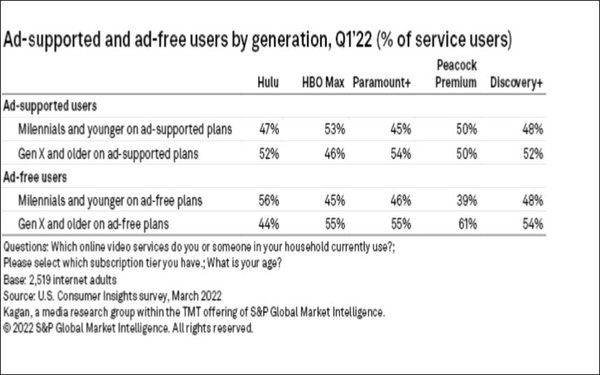 Video access type “varied by service but revealed no clear connection between cord-cutting (often viewed as a cost-saving measure that can stretch household SVOD budgets) and the choice between ad-supported and ad-free SVOD tiers,” reports Kagan.

Cord cutters represented about 25% to 35% of both ad-supported and ad-free viewers for most services, and traditional multichannel homes were dominant across both groups.

One difference noted: With the exception of HBO Max, users of ad-free tiers tend to subscribe to a higher number of subscription video-on-demand (SVOD) services than their ad-supported counterparts.

“An abundance of ad-supported tiers may be enabling some households to squeeze in an extra service they otherwise might not pay for, but SVOD adoption levels among users of major offerings remain high, at about six to nine services across tiers and services,” the analysis observes. 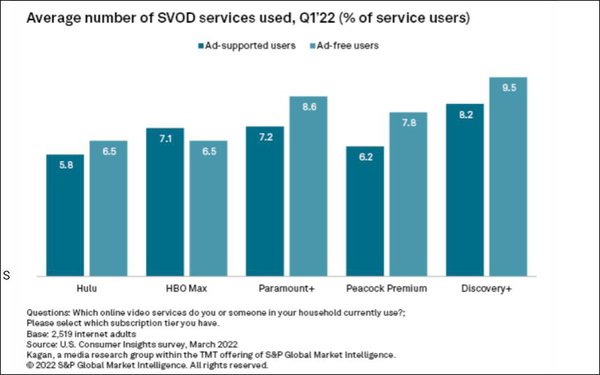 Interestingly, many ad-supported users of major services are already also subscribing to the existing premium, ad-free versions of Netflix and Disney+.

About four-fifths or more of ad-supported users at Hulu, HBO Max, Paramount+ and Discovery+ also use Netflix, and solid majorities at most services also use Disney+. In short, “Most [ad-supported VOD] households did not appear to be ditching Netflix and Disney+ en masse and instead were likely to include them along with numerous other services in their regular rotation of services.” 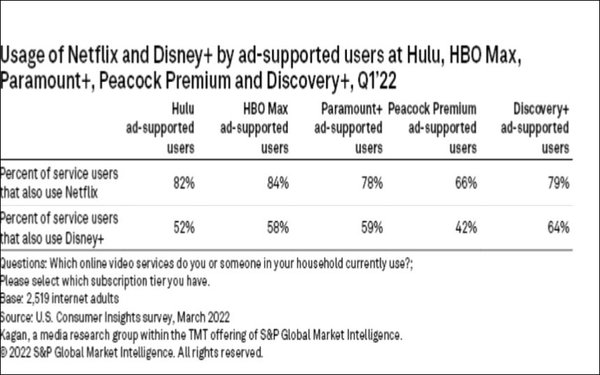 In terms of behavior patterns across services, ad-supported users tend to continue that choice across platforms, and ad-free users are somewhat more likely than ad-supported ones to go with the more expensive, ad-free options at other services.

For instance, here are the patterns for Hulu and HBO Max ad-supported and ad-free viewers in terms of their choices at other services: 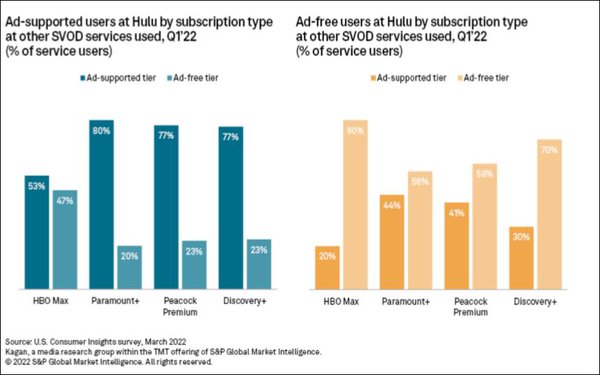 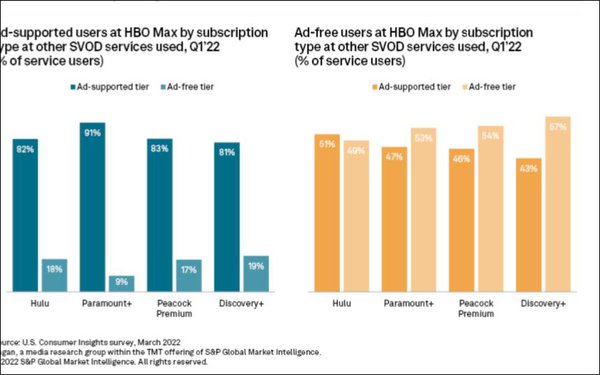 Kantar acknowledges that a case could be made that Netflix and Disney+ may prove to be different" when it comes to ad viewing preferences and subscription tier choices, given that Netflix “has been an ad-free haven for its entire existence,” and some parents do not want their kids to be exposed to ads during kids’ programming and may be willing to pay to keep Disney+ that way.