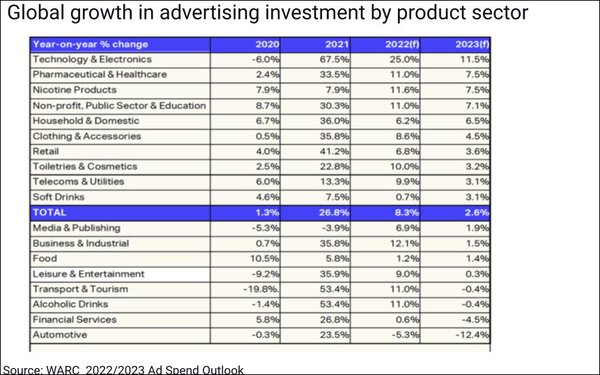 The forecast calls for an actual decline in spending for linear TV in 2023 and a $40-billion hit on social media over the two years, with a more upbeat outlook for video streaming.

The $90-billion dip in growth potential reflects expectations of the growth rate of global output dropping by half and “acute supply-side pressures fanning inflation,” says James McDonald, director of data, intelligence and forecasting, WARC. “Yet brands are still spending as the COVID recovery continues, and global ad trade remains on course to top $1 trillion in value by 2025.”

However, the overall numbers are expected to take a significant hit due to a slowdown in social media ad spend driven by cutbacks in ad spending by the small and medium-size businesses that will be hardest hit by economic pressures, and collectively account for a significant share of overall social revenue.

WARC estimates that social media/online companies will take a collective hit of about $40 billion to their bottom lines over the two years as a result of the difficulty of ad targeting due to Apple’s consumer opt-in privacy measures.

But platforms with rich sources of first-party data – most notably Amazon, Google and Apple – “are well-placed to weather future headwinds by offering measured performance in a climate where return on investment becomes paramount,” says McDonald.

“Sky-high CPMs are potentially driving some advertisers to look to cheaper media,” and pay-TV providers are susceptible to churn if disposable incomes decrease further, the report notes.

In contrast, global ad spend in the total video streaming sector (including ad-supported video-on-demand/AVOD, broadcaster video-on-demand/BVOD and all over-the-top OTT) is projected to outperform the overall market, with 8.4% growth this year and 7% next year.

Within this, the AVOD sector – including major players such as Hulu, Roku and YouTube – is expected to rise 8% this year and 7.6% in 2023, to reach nearly $65 billion.

Broadcaster-owned streamers are projected to see 9.7% growth this year and 5.2% in 2023, but BVOD will reach only a relatively modest $18.5 billion.

“There is already evidence of saturation in the streaming market, particularly in the U.S., with audiences now using seven streaming services on average (compared to the global average of five),” WARC points out. “Consequently, new entrants are just as likely to be fighting for existing advertising spend as they are for incremental dollars, which could hinder the overall growth of streaming operators in the short to medium term.” 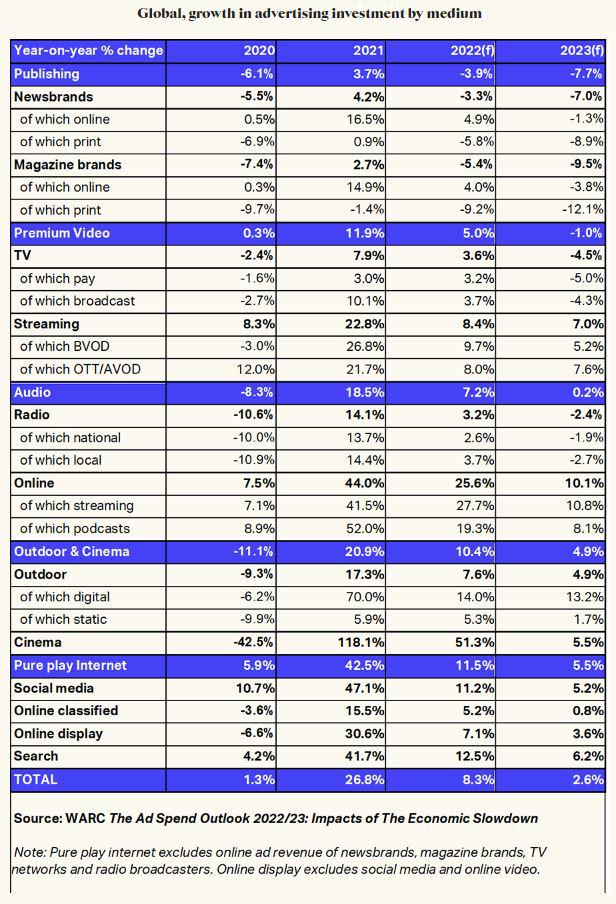