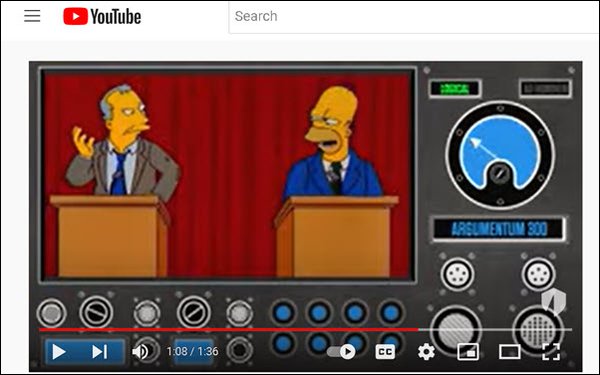 A study released on Wednesday by Google and social scientists indicates that 90-second “pre-bunking” videos can help combat online misinformation.

The Google videos studied use cartoon formats featuring Homer Simpson and other pop-culture characters to educate social users about the tactics commonly used by purveyors of misinformation.

Rather than try to refute specific lies or distortions, the videos seek to “inoculate” viewers by teaching them about misinformation techniques such as creating false choices and using emotionally charged language and scapegoating.

One video, for instance includes a clip from “The Simpsons” (above) and other characters and examples to explain ad hominem attacks (attacking the speaker rather than addressing the argument). Others use characters from “South Park,” “Family Guy” and the Star Wars franchise.

After being exposed to the videos in a lab setting and as ads in a live YouTube campaign, subjects were found to be significantly better at distinguishing false information from accurate information when subsequently presented with a series of claims, and less likely to share manipulative videos.

The study, which had more than 30,000 participants, was published in the journal Science Advances and authored by Beth Goldberg, CEO of Google’s anti-extremism research arm, Jigsaw, and a team of researchers from Cambridge University, the University of Bristol and the University of Western Australia.

It is part of years-long misinformation inoculation research and efforts by Google.

The pre-bunking videos worked for conservatives and liberals, whether or not people who already “conspiratorial,” and even on people “who are very receptive to bullshit, which was particularly exciting,” Goldberg told Protocol.

The results have led Google to expand its misinformation push in Eastern Europe in the weeks ahead, by blanketing Poland, Slovakis and Czechia with a series of videos to help people spot and reject misinformation about migrants.

While Google isn’t planning to use pre-bunking videos for the U.S. midterm elections, the company said it may do so for future elections, according to CNBC. Google is also making the videos “freely available for all to use as they wish,” and suggesting that influencers or nonprofits might use them to pitch in on the battle against misinformation.