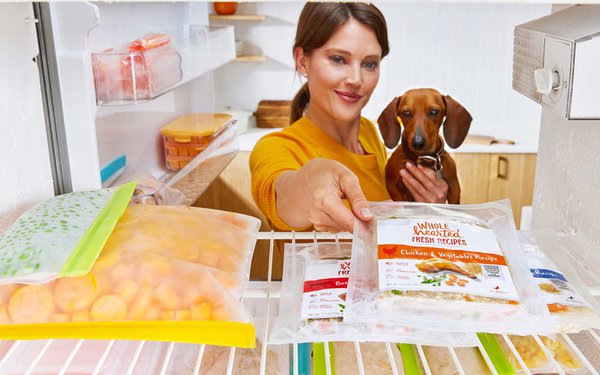 While it may seem like yesterday that everyone welcomed a new pandemic pet into the family, America's enthusiasm for pets is fading. As more people head back to work, they are spending less, and Petco Health + Wellness Co. is lowering its sales forecasts as a result.

A notable exception is high-end fresh and frozen pet food. The San Diego-based retailer hopes that launching WholeHearted Fresh Recipes, a line of frozen entrees for dogs, will help. It says the nutrition line directly responds to the growing interest from younger consumers in high-quality, minimally processed pet food.

While the retailer marks its 15th straight quarter of sales gains, revenues came in below analysts' expectations, as did its profits.

And it now forecasts revenue of  to  for the full year, substantially less than its earlier predictions of between $6.15 billion to $6.25 billion.

It continues to do well in consumables, with food sales and treats up 12%. And in its vet and services division, revenues jumped 21%. But demand for supplies and companion animals is declining.

Petco "benefited from consumers gravitating to more premium consumables options, and the company stated it is not seeing a trade-down dynamic," writes Seth Basham, an analyst who follows the company for Wedbush Securities.

The company is adding fewer new customers, which translates to a decline in its average revenue per user, which Basham considers a "yellow flag." But he continues to rate the company as likely to outperform its peers.

Peter S. Benedict, an analyst who follows Petco for Baird, is also encouraged. He writes that the second-quarter results "reinforced the resilience" of pet consumables. He notes that the company is being prudent in expenses and isn't "backing away from investments that should allow them to capitalize on important structural industry trends," such as the food launch.

Petco has high hopes for the new food, which it developed the product in partnership with JustFoodForDogs, which already sells its food at Petco.

"Pet parents are driving one of the biggest trends the pet industry has seen as they increasingly seek out fresh, human-grade food for all members of the family," said Ron Coughlin, chief executive officer, in its launch announcement.

"Led by Millennial and Gen Z pet parents who are hyper-focused on their pets' health and wellness, we're seeing the premiumization and pet humanization trends continue to grow," he added. "WholeHearted Fresh Recipes will help meet this demand toward high-quality food while playing a key role in Petco's leadership in the fresh and frozen space that is expected to grow to $4 billion by 2025."

WholeHearted Fresh Recipes will be available in frozen form at most stores early next month, with refrigerated options planned for the future.

Another growth spot is Petco's digital advertising network. "It is now firmly a jewel in Petco's crown with over 200% growth year-over-year," Coughlin said in a conference call to discuss its earnings. "Our platform and bespoke data capabilities provide a compelling offering for vendors. We're confident our pipeline of in-flight enhancements will support projected triple-digit growth year-over-year for full year 2022."