Thrill Is Gone As Audiences Dwindle For Emmys, Other Awards Shows 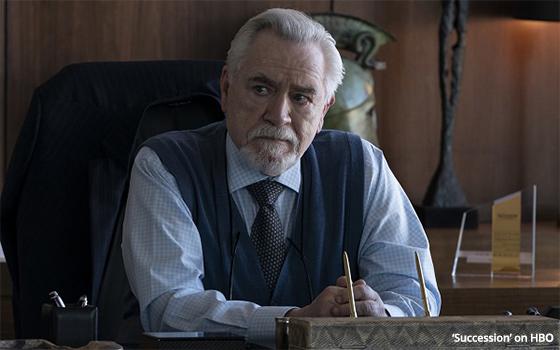 Few annual events on TV symbolize the flattening and fractionalization of our video media better than our annual awards shows.

The Emmy Awards -- which air on TV and honor TV -- have seen steady declines in viewership on TV for years, even as the tonnage of TV content has exploded like the big bang -- and, it is often said, everybody watches TV.

That is, of course, one of the reasons -- if not the reason -- that the Emmys don’t draw a mass audience -- or at least one that cuts across all demos to achieve the Holy Grail that seems only to be reached these days by the Super Bowl: Mass Appeal.

More shows plus smaller audiences for each of them equals a situation in which no show attracts a fan base sufficient in size to care particularly who or what wins Emmy Awards.

Audiences just don’t have any skin in this game anymore. Plus, when the Emmys are on, their attention is elsewhere.

They might even be choosing to watch “Succession” on HBO Max (pictured above) rather than watch it win a truckload of statuettes at the Emmys, which are coming to TV for their 74th edition Monday night on NBC. “Succession” is this year’s most-nominated show with 25.

This year’s Emmy Awards will have to beat last year’s total audience tally -- an estimated 7.83 million -- to see positive headlines in the trade press on the morning after about audience growth, not declines.

It is true that last year’s viewership represented an uptick from the previous year of 2020, when the Emmy show on ABC drew the smallest audience in Emmy history -- 6.4 million.

Viewership has declined almost every year since.

The same story can be told, with some variations, about the three other major awards shows that have long been annual staples on TV -- the Oscars, Grammys and Tonys.

The following year, in 2021, total audience for the Oscars came in at less than half of that at 10.4 million.

That decline can legitimately be blamed on the pandemic, which closed movie theaters and disrupted production and distribution of major movies. The Best Picture winner that year was “Nomadland.”

The news was brighter for this year’s Oscars last March on ABC as viewership rose to 16.62 million. For the record, the all-time audience champ of Academy Awards telecasts was in 1998, the year “Titanic” won Best Picture -- 55.25 million.

The Grammy Awards have been particularly hard hit by recent audience declines. Last April’s Grammy Awards on CBS drew an estimated audience of 8.93 million, more or less even with 2021’s tally, 8.8 million. By comparison, the show’s audience stood at 18.7 million a year earlier, in 2020.

Compared to the other three annual awards show, the Tonys have always had the most modest audiences. Having said that, the show on CBS plummeted to an historic low in 2021 -- 2.8 million -- a result likely due to the closing of theaters in the pandemic.

But the Tonys this past June did gain viewers for a total audience tally of 3.86 million. However, as recently as 2018, the Tony audience was 6.3 million.

In the final analysis, the audience declines for the Emmys ratings will likely have no bearing on viewership generally for the TV shows that it honors or even the ones it does not honor.

Now more than ever, the Emmys matter almost entirely to the people who win them. All best wishes and congratulations to all of them.