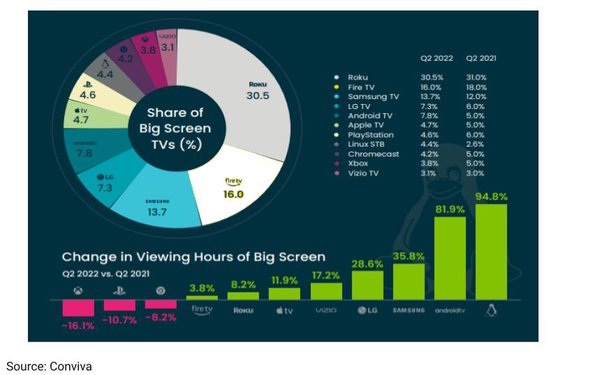 While Roku continued to command by far the largest share of global streaming time on big-screen devices in this year’s second quarter, at 30.5%, the growing fragmentation of devices is clear in the gains of some newer competitors, according to data from the latest State of Streaming report from streaming analytics platform Conviva.

Roku’s big-screen streaming share was down by less than 1% versus Q2 2021, and it saw 8.2% growth in viewing hours (chart above). Thanks largely to its dominance in North America, the brand also continues to claim 23% of time on all devices globally.

Linux STB saw the biggest viewing-hours gain of all (94.8%), and enjoyed a 1.8-point bump in big-screen share, though it is still at a relatively small 4.4%.

Chromecast, Xbox and PlayStation all saw a decrease in share.

The largest gains were in Asia and Latin America: 90% and 70%, respectively. Despite its maturity, North America saw 5% growth for a second consecutive quarter. 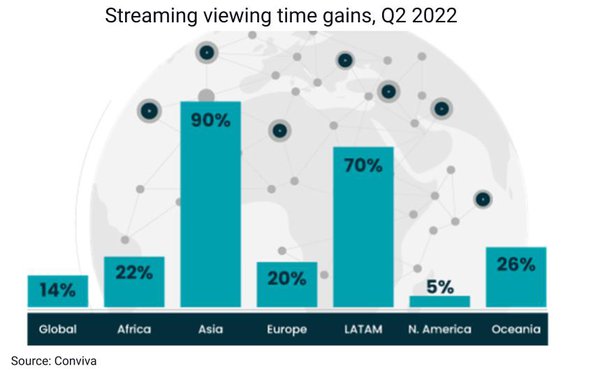 Fragmentation is also growing in the mobile streaming arena.

To date, the iPhone has been the primary device for mobile streaming, especially in North America. But in Q2, Android phones increased their viewing hours at a much faster rate (24.9%) than iPhones (15.9%). 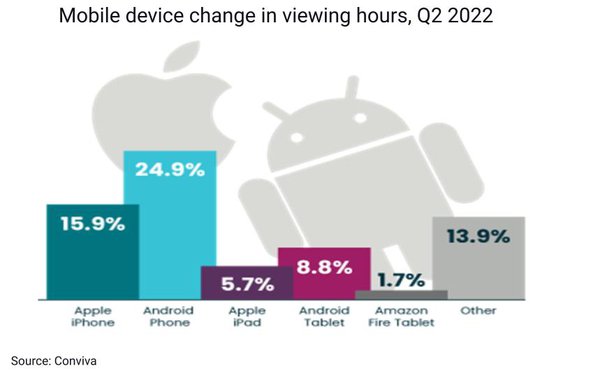 “As streaming publishers expand into newer, less mature streaming markets outside of North America, optimizing the streaming experience for the android mobile device market will be of increasing importance,” notes Conviva.

In terms of overall streaming quality, bitrate rose globally across all screen types and devices, but often at the expense of other performance metrics.

For example, smart TVs saw the largest increase in bitrate of all screen types — up 15.1% year-over-year — but higher definition came with notable increases in video start failures, video start time and buggering.

PlayStation and Roku were the only smart TVs that managed to increase their bitrates while also decreasing video-start times.