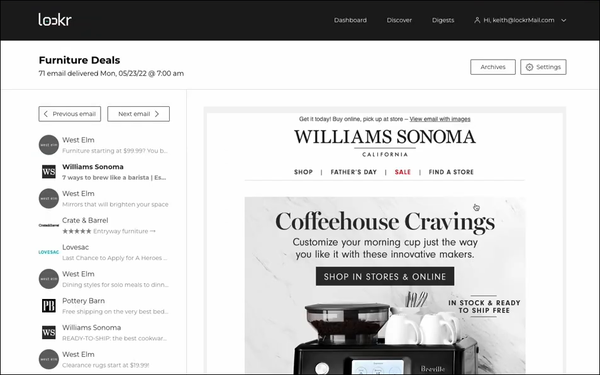 Email management platform lockrMail has launched a free tool that allows email senders to combine emails and newsletters about a common subject into one email.

The new tool, Digests, enables users to combine all emails into one digest. They can also add filters to further curate content.

In the case of cooking, for example, the sender can curate content by cuisine, ingredient, or other variables. In addition, the Digest can be scheduled for delivery at the time and day of the user’s choosing.

The goal is to provide email recipients with  “a way to ensure they see the emails they want in a consolidated and easily absorbable format,” says Keith Petri, founder and CEO of lockrMail.

Petri notes that the crowded email channel is weighed down by massive amounts of marketing content, newsletters or deals that don’t always meet our personal threshold of interest.”

lockrMail is designed to serve as “the club bouncer for email addresses,” Petri adds.