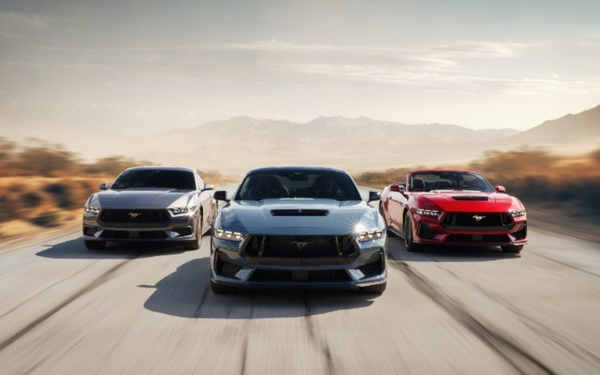 Ford Motor Co. is dominating the North American International Auto Show in Detroit, both in terms of floor space and product news.

The return of the Detroit auto show, the first in over three years, is an opportunity to interact with customers and give them the chance to experience Ford's new vehicle lineup, says Suzy Deering, Ford global chief marketing officer.

The automaker unveiled the 2024 Mustang, rumored to be the last gas-powered iteration of the popular sports car. The seventh-generation vehicle debuted Sept. 14 at an hour-long evening event outside the Detroit convention center.

Hundreds of media members, employees and enthusiasts gathered to see the new vehicle, with a model lineup including a convertible version as well as the  “Dark Horse” edition, the first new Mustang performance series in 21 years, featuring a new 5.0-liter V8 projecting 500 horsepower. It comes standard with a six-speed manual transmission.

The livestream of the event already has garnered more than a half-million views on YouTube.

Ford Executive Chairman Bill Ford announced at the event that the Mustang will soon return to the 24 Hours of Le Mans, an endurance-focused sports car race held annually in France.

“Mustang is raced at all the great tracks around the world, but there is no race or track that means more to our history than Le Mans,” Ford told the crowd.  “It's where we took on Ferrari and won in the 1960s -- and where we returned 50 years later and shocked the world again. Mustang will go back to Le Mans.”

More than 1,000 Mustangs of an array of model years gathered at the nearby Ford headquarters in Dearborn for “The Stampede” into downtown Detroit ahead of the reveal.

Attendees were encouraged to wear attire inspired by their favorite period in Mustang history, from the 1960s through today, to celebrate every decade of the car's existence. The top costumes earned prizes, including a two-year lease of an all-new Mustang GT for the first-place winner.

Several of the historic “pony cars” were available Sept. 17 for a “Take-A-Spin” event.

The six vintage Mustangs began their caravan to Detroit from the LeMay - America’s Car Museum in Tacoma, Washington, on Sept. 6 with stops along the way across nine states.

Back at the Detroit auto show, attendees during the nine-day show can opt to ride in a Bronco SUV at the Built Wild Drive Track or experience the acceleration of the F-150 Lightning and Mustang Mach-E at the “Built to Electrify” track.

Throughout the show, Ford also will host demonstrations and Q&As with product specialists and Ford engineers. These include sessions on electric vehicles that will cover home charging, route planning and charging on the road. Another will focus on connected technologies.

“We want the drive experience to be even more effortless and personal, and the new Corsair will deliver that with advanced technology and new features,” Sprague says in a release.